Co-creators Chris Sides & Chris Travell split writing & art duties between themselves to bring us their dark & challenging one-shot Close, which they published under the Comichaus banner just a couple of months ago.

Opening with central character Jared emerging from prison with his few belongings crammed into his pockets and freedom on his mind the last thing he thought he’d see was one of the cops that helped put him away.  Cue Detective Coburn and Jared’s brief glimpse of a new start seems to give way to the turmoil of the past and while we might have thought his time inside would have helped reform him……it’s soon all to obvious that once a stalker always a stalker.

The baggage of his crimes is joined by the baggage of a gritty & grimy existence in prison that’s only let his obsession fester but the two creative team flip perceptions on their head when the subject of Jared’s obsession is murdered with him being the only witness.  It’s a cruel & interesting twist to throw into the mix but as the world starts to close in around him he’s under threat and left scrambling to try to survive the attention of the authorities. 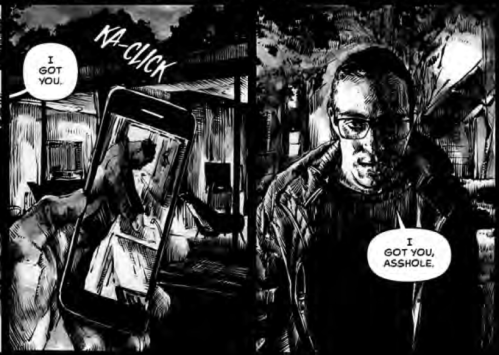 The road we follow Jared on becomes far more varied than I was expecting and the turmoil he’s going through is matched by a strange combo of concern & contempt.  That’s owed to the story that takes expected criminal elements and makes them understandable in this specific scenario.  It becomes a case of context, context, context and the challenging plot is shadowed by some of the most subtle & powerful art I’ve seen in a while.  There’s a ton of dialogue to fit into the story but Ken Reynolds embraces the panel layout and works with it to keep the story flowing freely.  A nod goes to Colin Lorimer for that cover too as it captures the finer details in the story with some effortless use of negative space.

The creative team combines to give it that ‘car crash’ vibe where you can’t force yourself to look away and mainly because the issue has become intoxicating very quickly.  As the story progresses and we ease through to the finale, the surprises mix with the art detail to close in around poor Jared, leaving us with a great story that challenges the criminal elements it opened with and in the end it leaves you sighing “holy shit” slowly under your breath.