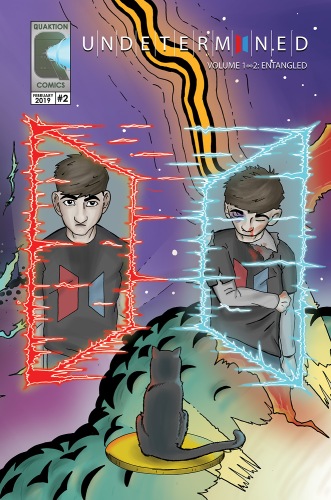 The first issue of Undetermined from Writer Andy Perry & artist Chris Holmes slipped into the “surprise package” category when I caught it back in May and I was lucky enough to get a look at the newest issue just as it hit Kickstarter earlier this month.

While we saw Robert’s world flip from the mundane to an almost overwhelming mix of multi-dimensions & infinite possibilities, there was no doubt that his story was an  infectious one but this second issue takes that to a whole new level from the very beginning.

The every-day events of a school boy trying to get through his classes and keep his home-life in check sees an air of the familiar throughout this issue but those fantastic elements that capture the big ideas of parallel worlds and the consequences within them prove to be an even bigger element of the story.  This gives each page-turn an unpredictable edge……and that alone makes this feel like a story that’s evolved from its initial ideas to something greater.  The complex elements can become jarring at first but in the context of the whole story it combines to really turn this into something special & unique. 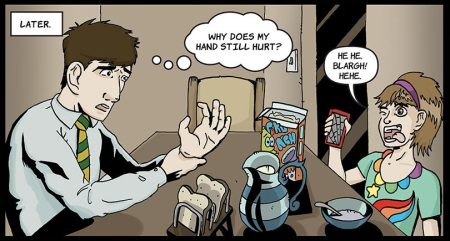 The art from Chris has the same simplistic feel to it but he’s poured a ton of detail into the more complex pages of the story and that helps to really give some of those elements that sense of awe and uncontrolled inventiveness.  The story & art combo spar against and with each other across the second issue and that engaging to & fro makes this a release you can read & re-read with ease in much the same way as the opener did.

Undetermined has ensured it’s a title to take notice of in just the space of a couple of issues and the measured approach to plot & art style has allowed it to ease into its own complex universe and build a story that’s equally familiar & unnerving.  This leaves us guessing what’s next at the end of every page turn & issue itself, so I have no idea what we’ll see in future issues……but I sure as hell know that I want to read them.

Check out the creators work through the links below: