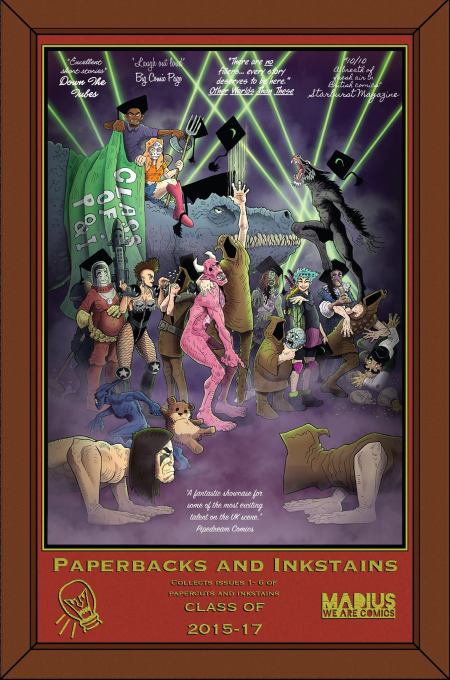 The Papercuts and Inkstains quarterly anthology from Madius Comics has been an eclectic mix of horror, sci-fi, fantasy & more and after ploughing their way through six issues the team are aiming to collect them all into a single volume through Kickstarter.

Those first six issues ranged from self-contained madness to ongoing stories and were a great way to showcase the type of titles the mighty Madius gang were aiming to release.  Six impressive single issues later and the madness contained within the black & white pages are being tweaked & remastered for inclusion into a 200+ page edition with the added bonus of the whole series being coloured.

The writers, artists & now colourists are pulling off the equivalent of switching from VHS to Blu-ray as the darkness of the horror, the emptiness of space and the slapstick of the humour are pushed to a whole new level as the indie comics version of Monty Python brings the fun & laughter to the masses.  At least, that’s the hope and it’s a title that deserves to to reach it’s target as you’re getting a great return for your pledge.

You can get hold of the collected edition and a ton of other goodies on the Kickstarter link below:

You can also check out more of the Madius Comics titles over on their website and keep track on what’s next through their Facebook & Twitter pages.