Creators Simeon Aston & Jeremy Biggs brought Metal Made Flesh to life with a series of successful Kickstarters and with the third volume hitting print next month and the introduction of additional creators into the mix, it felt like a good time to catch-up with them.

What will we see next from the MMF world?

Simeon: The next phase of MMF will see our three main anti-heroes brought together finally. We’ve pretty much fleshed em out as much as possible and now it’s time to see if they can work together against a common enemy.

Do you have the whole MMF series planned out?

Jeremy: Not in minute detail.

Simeon: There’s a definite endgame that we’re working towards with the story themes and character arcs, and the central questions – revenge , redemption and deceit.

Jeremy: We know how it ends and more or less how we’re going to get there – but we’ll never let on!

Simeon: The trick now is to tighten everything up so that it all fits together to form a cohesive and fluid story. 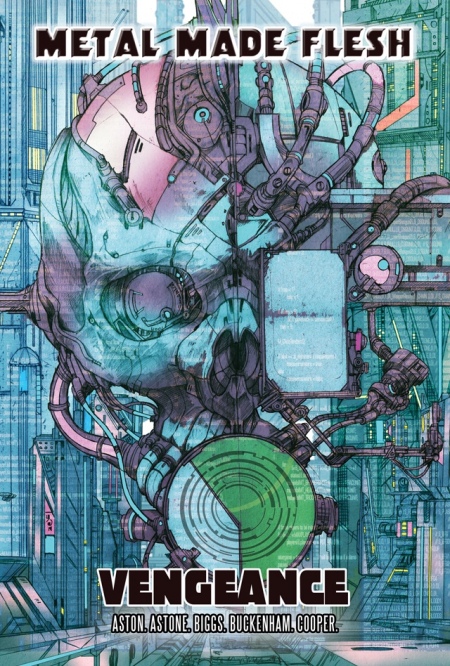 MMF progressed from illustrated novel to full-on comic but has that been more of a challenge to create?

Simeon: As an illustrator it’s been a little tricky to move into comics. Each time I’m learning more about page structure and flow. I’ve also shown my work to lots of people who are well versed in comic book art and I’m always asking them for advice on how to improve.

Jeremy: It’s been great to see Sim grow in this regard – and to have other artists on board who push him to try and experiment with his form a little. He’s moved from comping everything together from separate drawn pictures in Photoshop, to drawing everything on the page. From a writer’s point of view, I’m always looking to understand the language of comics, to piece together what works, and give the artist lots of fun things to draw. With the stories Sim draws, I tend to be more Marvel method – where he comes to me with a fully drawn story and a basic script and I have to fancy up or retrofit the words to fit his images – which is a good challenge.

The artwork has taken a serious step up as the books have been released but do you feel there’s still room to improve further?

Simeon: There’s always room to improve. For me, I try to keep the same feel to the artwork throughout the books but also improve technically and produce better quality work. I’ve become more aware of what sort of levels and colour schemes work better in print and how best to present posters and products.

The 2nd volume and more recent release ‘Deception’ has seen you open the MMF world up to new artists – how has that been?

Simeon: It’s great seeing the world grow and evolve. Everyone that works on MMF totally gets what kinds vibe we’re going for. Most of them have very similar interests\styles in art, writing, comics, movies and such. So it’s cool. Everyone’s on the same page for the most part.

Jeremy: Yeah, I think it’s fascinating to see artists tackle Simeon’s art style in their own way. We have some core concepts that come from Sim’s artwork that the artists have to work around – the way colour is used, basic rules about architecture, space and so on – but they have freedom to interpret it in their own style. One of the great privileges we’ve had is to get on experienced artists such as Gary Erskine, who have years of experience, and pit them alongside some emerging talent. It’s something I’d love to do more of, to curate new and talented artists, put them in touch with the old vanguard and let them share / react / help each other out to develop their craft. 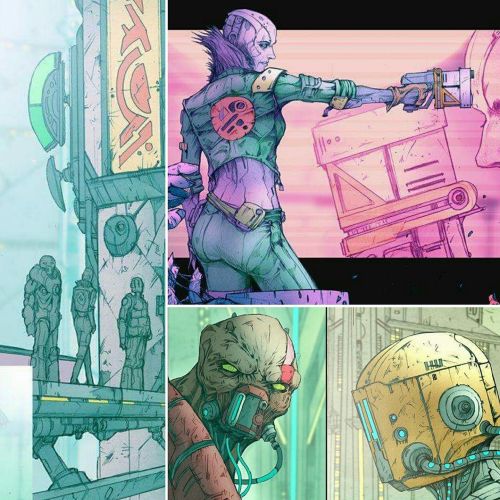 Do you have a list of other writers/artists you’d like to collaborate with on MMF in the future?

Jeremy: I have a dream list in my head as to who we could get to broaden the team. I spoke to (Watchmen’s) John Higgins at True Believers in Cheltenham and it seemed like something he’d be interested in working on. John Aggs is someone we’ve wanted to have on the team for a while but he’s always been too busy to fit us in. Kev Crossley, too – some of his artwork is just beautiful. Writers – I’d still like to get Mike Garley in on a story – he pitched us a great story idea a while back. I’ve got a perverse idea to get Grant Morrison and Alan Moore in on a story collection together – heh. Dream big. Fail better.

Simeon: We’ve assembled quite a team so far. I would like to keep going with most of the guys we’ve got as they’re already invested in the world, but we’re always looking for new people. We also didn’t have room for a few people this time round so we might hit them up in the future.

Do you have a favourite character to write/draw?

Simeon: I dunno I’ve not really thought about it. I guess Izobel is my favourite. She was the start of the whole thing really. The world and story kinda evolved around her at the beginning.

Jeremy: I find Phaeon the easiest to write for as it’s fun writing for someone who is such an unconscionable shit. I like to give him as much frustration as his little body can handle. Izobel is the hardest, I find – I think Sim has a better grasp on her character than I do.

What else are you both working on just now?

Simeon: MMF3 is almost wrapped up and ready. So me and Jez are tweaking and fine tuning it. I’ve just finished a poster for a sci-fi short movie in NYC called ALT, and I’m also doing a few concept art bits for a few RPG games.

Jeremy: Most of my work on MMF3 has finished, I’m just waiting for the artists to deliver the pages then get it out to the backers. Similarly on Super Robot Mayhem which was successfully Kickstarted back in January. At the same time I’m putting together a five issue series called “Punk as Fuck” for the relaunch of Deadline, working on a story with one of the art directors for Mavel’s Iron Man trailers for a fantasy science fiction story “Dream Walkers”, whilst penning a hardcore Cyberpunk Graphic Novel “Empire of Meat.”

You can check out the Metal Made Flesh website to get your hands on the book so far with the third instalment hitting print at the end of May.  You can also keep up to date with what else is happening in the MMF world on Facebook and Twitter. The MMF gang will be at MCM London next month too.