Last week Chris Welsh (Wart, Doc Dino, The Grime) kicked off his Kickstarter campaign for new project Ness with the kind of early numbers comic creators dream of.  I was lucky enough to catch up with him and ask him a few questions about the project…..

Was Ness a story you’d been working on for a while?
A couple of years, yeah. It’s been something I’ve tinkered with on and off, knocking the story about until it was in a place I was happy with, then I started comic-scripting it. I’ve always wanted to write a big monster thing but I’d never found the right story for it, hopefully this is it!

This is a new collaboration for you with Robert, Dee & Robin – what’s that been like?
It’s been great so far. Everyone is fun to work with but still professional. I’d recommend all of them to everyone, except not until Ness is finished. I need them to make me look good. It took a little while to find the right artist for it, and luckily Rob is smashing it so far. 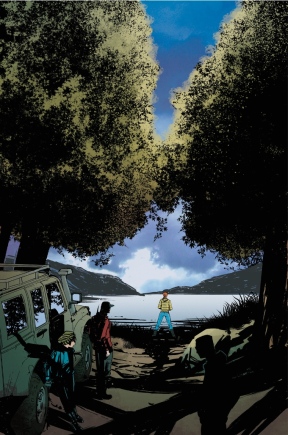 The Kickstarter has some great artwork – does it match with what you envisioned?
I had some pretty lofty goals for the artwork and the finished pages look even better than that. The inks are gorgeous and Dee’s colour work makes everything look beautiful. Robin’s letters are pretty tasty too.

You’ve got some great artists from the Indie scene involved to do pin-ups for the project – did you always have that in mind for Ness?
I knew I wanted some pin ups so I put out a call on Twitter, and the response I got was amazing. So many people wanting to get involved. It warmed my cold, dead heart. By the end of the four-issue project I expect I’ll have had some work off every small press artist there is. I’ve already got a few great ones lined up for issue 2…

The Kickstarter has got off to an amazing start – are you focused on beating Tom Ward on the Kickstarter success front?
The Kickstarter got off to an INCREDIBLE start. 80% funded in the first week, as it stands now. Much better than I ever expected, but there’s still some way to go… and then, adfter that, there’s stretch goals etc.
As for Tom… if that is even his real name… We keep the rivalry friendly, it’s just a bit of fun, but we’re also aware that it’s going to end in a shirtless fist fight, probably in the rain, in a convention centre car park somewhere. “THERE CAN ONLY BE ONE KICKSTARTERHIGHLANDER, TOM”. But then afterwards we’ll probably go for cheeseburgers or something.

Do you have plans for Ness beyond the 4 issue arc?
Kiiiind of. The characters won’t continue, but there could be themes that carry on into a second story arc… I’ve also got an idea for a prequel set in the early 1900s, which would be lots of fun to do, but it involves people who actually existed… so we’ll see. It’d be nice to do more, but right now I’m focused on these four issues.

Do you think you’ll move on to other mythical beasts?
Ness is its own spin on the Loch Ness Monster thing, it’s not exactly about Nessie… but it’d be a lot of fun to do the same sort of thing for the abominable snowman, chupacabra etc… the trick would be to take what people already ‘know’ and mess with it.

You’ve gravitated towards darker, more horror-themed stories – is that something you’ve done on purpose or just fell into?
I think it’s what I’m good at, and it’s where my interests are. I’m a big horror fan, plus it’s loads of fun to write scary stuff. Especially in comics, because you get to write down something horrific that’s sitting in your head and then have someone draw it to life. It’s just a fascinating process. That said, I did also co-create Doc Dino, which is a comic about a dinosaur who is also a surgeon. So it’s not all doom and gloom. Just… mostly doom and gloom.

What else are you working on just now?
I’m polishing up Ness #2 and Doc Dino #2, I’ve just finished the script for Wart book 4, I’ve got a few anthologies I need to pitch to, as well as a new series I’m working on with Wart artist Ammar Al-Chalabi called AMERICAN MALEVOLENCE… and finally a very secret thing that I can’t talk about but probably isn’t as exciting as that makes it sound. Oh, and a few film scripts. And a novel. I like to keep busy.

Go check out the Ness Kickstarter to see the cracking rewards on offer and some more of the stunning artwork you’ll get to see in that first issue.  You can keep tabs on all things Ness related over on the Facebook page too and go catch up with the creative team through Twitter:

I can’t wait to get my hands on this and the next three issues of Ness from Chris and the creative team he’s put together.