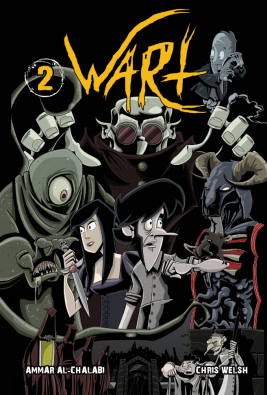 Last year I got a look at the Wart web-comic ahead of it hitting print (reviewed here) and since then I’ve backed the Kickstarter for issue #2 and got my hands on it.

While last issue saw our main character being ripped from his own world and dumped in a cell…..that turned out to be the beginning of a new life full of the unknown.  Dimension jumping & monsters seemed to be the order of the day for our everyman central character and we pick up with Wart still nestled in a sea of weird.  Strange universes full of druids, monsters, magic & all important rats and the topsy-turvy action is kicking off with Wart being dragged in all different directions. 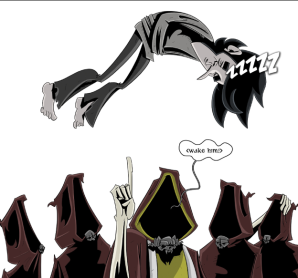 Although things were pretty lonely and bleak in that first issue there’s at least some hope in this for our wayward Wart as he’s less alone with the arrival of Blythe – the woman behind the faceless ghost in issue #1.  At least we know Wart isn’t going crazy…..even if the world around him is.  This all builds up as an escape attempt/saving the world is on the  cards so we’re only JUST starting the adventures for the reluctant hero.

It’s another solid issue from the creative team with Chris’s script keeping things ticking over nicely and keeping Wart and us in the dark as he lays out the strange world he finds himself in.  The only criticism I would have is just how cramped some of the panels feel with dialogue which only happens on a couple of occasions so it’s not an overwhelming aspect of issue two.  Ammar’s art is brilliant throughout, as it was in that first issue and the contrast of his cartoony style & the dark, horror themes make an interesting combination. The countdown to issue #3 can start now.