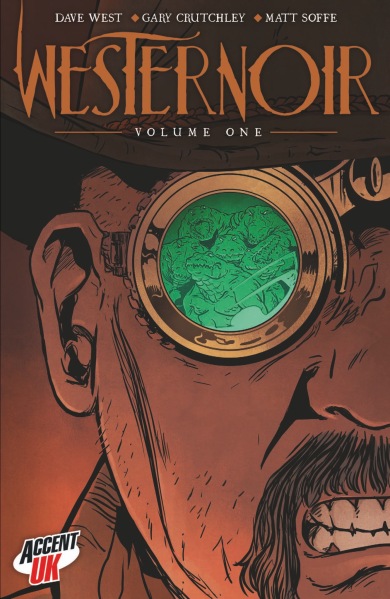 Accent UK have always seemed to be in or around my review list and WESTERNoir in particular has been a joy to read, so with a remastered edition promising more pages, more stories and full colour – it was time to catch-up again with the life of Josiah Black.

Josiah is a drifter after a life of being pretty much everything else from a farmhand, sherriff, killer, husband, father and more but a chance encounter sees him given a new direction.  This new direction lifts the veil of what he thought the normal world around him was made-up of and the realization that monsters exist gives him a stark reality check that he wasn’t expecting.

His mysterious benefactor sends him details of a thread he can follow to his next discovery, revelation & kill but the decisions he ends up being forced to make steer clear of being a simple case of black and white.  Even with his brutal & unflinching exterior, he still has the sense of a man with a solid moral compass but it just so happens that the things he faces will test that and most likely shatter any of the preconceived perceptions he has.

Co-creators Dave West & Gary Crutchley have built an intricate world around that central character and while he nestles somewhere between good & bad there’s no doubt that they’ve managed to give him a soul & depth that makes you feel like you’re on his side, albeit from a subtle starting position of mistrust.  The hurt that’s seeped into his bones from his previous life is etched into every line on his face and that contrast of humanity with the monsters he has to face off against, brings with it a much more solid connection to the man killin’ and drinkin’ throughout this whole volume.

I’ve been following this release since the beginning and when I heard it was having colour added to it I wasn’t entirely sure that it would add much to the story itself but colourist Matt Soffe has joined the team and brought a whole new dimension to a story I already knew and loved.  The sepia tones of the initial title pages through to the combination of the Wild West & brutal monsters in full technicolour, has really made me embrace this release with fresh eyes & a heightened sense of intrigue.

So much so that I’ve read it a few times now and felt like it’s an easier book to revisit than I remembered – the added pages & stories and the inclusion of material from the Tales of Westernoir release have given this remastered volume the fully loaded six-shooter appeal that it always had…..and then some. 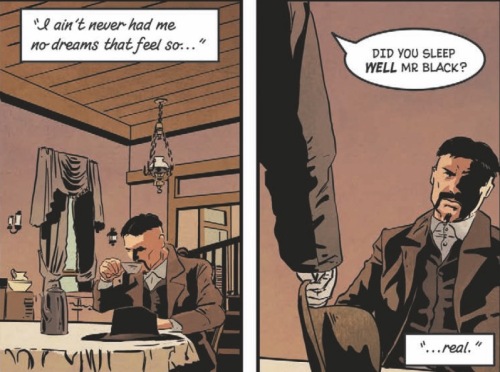 The Accent UK publisher mark on a book has continued to be something that will draw the attention and as soon as you’ve read that first release it usually leads to more but when the creators return to a previously released story and manage to level-up in this way it feels like something much more significant.  An evolved classic getting a new chance to shine ensures that taking a step back and then reimagining a title can work out for the better and with WesterNoir – Dave, Gary & Matt have shown how it’s done.

Find out all about this and Dave’s other work over on his Strange Times Blog and check out the campaign link below to get your hands on a copy: