Having been a fan of Fraser Campbell’s work for a while and a recent fan of Lucy Sullivan’s, it made all kinds of sense that a book they were both involved in would grab my attention – cue their first project together and an early look at what they’ve concocted with IND-XED.

It’s tagged as lo-fi sci-fi and tells the story of Meredith as she awakes from her normal sleep in her normal life to find it flipped on its head when she is IND-XED.  This sees her shunned from the world she calls home with touch, conversation and everything else seemingly forbidden by a random selection process that’s being going on for years.  The wave of unrest is palpable in her reactions to the world around her but as those in a similar predicament come into view there’s a sea of questions flowing out of her to try and find out “Why me?”. 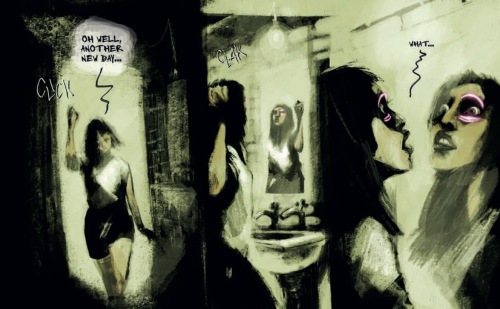 Fraser paces this just right and with us being dropped in just as Meredith finds out the shocking new, it’s a case of us being swept along with her as the frantic sense of panic settles in.  The reaction of those around her form family & strangers is a stark reality for her to face but as he turns the screw for protagonist & reader alike it’s hard not to be all-in with this at every page turn.  That sense of loss and an inner defiance tussle with each other as the journey progresses and those emotions hit all the harder thanks to Lucy’s work on the art.

The panel angles, the combinations of light & dark, the facial expressions and the sheer energy that comes from the visuals of the book makes it feel like something you’re going through with the central character, to the extent that it gets under your skin from the off and you’re looking for the same answers to the questions being asked by Meredith.  The tones and intricate uses of colour add another layer of detail to the story that’s subtle in it’s execution but significant enough not to go unnoticed. 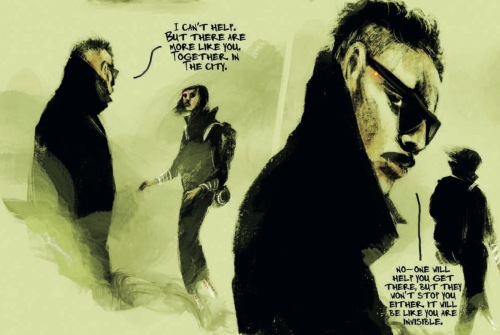 As hooks go, the Campbell/Sullivan combo was a key one for me but they trumped that with what they poured into the pages, and I got a Steve Niles/Ben Templesmith-like vibe coming from the pair that packs a punch in itself.  The creative team was rounded off by Hassan Otsmane-Elhaou on lettering who does some great work given some of the dialogue volume that’s thrown at him but it all flows like a situation spiralling out of control quicker than you can catch your breath…..which is apt given the events we are seeing.  That logo design from Alisdair Wood is well worth a mention too as it’s the attention grabber it needs to be.

All in all, I thought the writer/artist combo for this was special when it was announced but it ended up exceeding everything I was expecting and even the glimpses of art here n there on social media hadn’t given away just what ended up becoming a reality.  It’s characters, the situations & the world itself are exceptional elements in what turned out to be the lo-fi sci-fi that I needed and I’m torn between wanting to see more and being satisfied with how this one played out…….that’s GOT to make this a win as well.  Amazing stuff.

Catch-up with the creators at the following links:

Get your hands on a copy through the campaign link below: