I initially stumbled across Skies of Fire from Mythopoeia through Kickstarter and after falling in love with the first 3 issues I was glad to see the latest issue become available again last year.

Writers Vincenzo Ferriero & Ray Chou help sustain the same momentum and then some in this fourth release but they’re really stepping up the action as the universe they’ve created from the ground up is taking shape.  The Zephyr airship is well on its way in the skies when the Captain & her army of blue-coats show their real colours to the crew they’ve brought together to venture into the first of their missions. 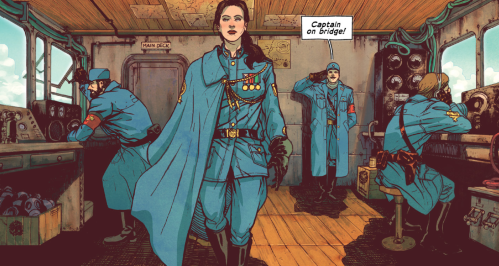 The clash of personalities between the main characters and their wider groups begins to take its toll but with the Captain’s relentless attitude towards discipline weighing down on them all the tension is tangible in the slick plot from the writing team.  The universe is expanding like the skies before the battle-ready battleship and the scale is really brought home with art that sweeps from claustrophobic cockpits to breathtaking vistas with a stunning sense of ease.

The art from Pablo Peppino has somehow managed to improve from the amazing work poured into those first three issues and with Bryan Valenza nailing it again on colours the visuals are just hitting a whole new level.  As the tension rises among the crew there’s quite a bit of dialogue to be tackled in this particular issue but Zakk Saam’s lettering manages to keep that under control throughout the whole book and keeps the flow going.

As accidental discoveries go, Skies of Fire was already a bit of a revelation for me but it’s a title that has continued to surprise with every issue & page turn, with this fourth instalment being no different.  It’s a stunning book to read digitally but the scale & full impact of the visuals are really shown at their best in the oversized print format they’ve opted for as it injects that additional ‘wow factor’.  Four issues of world-building & amazing art has been more than enough to slide this into my ‘must-read’ AND ‘must-recommend’ categories I have in my head and I can’t wait for the next issue.

You can check out this and the other Mythopoeia titles over on their website and keep updated with progress over on Facebook & Twitter.  You can also pick up the first four issues of Skies of Fire over on Comixology.