Vital Publishing will launch their latest title Purity Ring at Horrorcon this coming weekend (11th & 12th July) but ahead of that release I thought I’d take an early look at what to expect from it.

Writer John Farman whisks us off to small-town America where the latest Purity Ball is just kicking off and the hopeful parents long to see their children accept abstinence in a quest to remain pure until marriage.  At the centre of the lavish event is The Purity Ring itself, an elite social group made up of all the cheerleader/quarterback types you’d expect with a similar sense of their own self-importance.

All is going well until the unveiling of the sacred alter brings with it a fairly grim discovery for the unsuspecting crowd.  Flash-forward 364 days and on the eve of that unsettling discovery we see that The Purity Ring itself has a number of secrets which are far from their “holier-than-thou” exterior image conveys.  If anything, you kind of hope these people get what’s coming to them…..and as if John is reading our minds the body count starts to rise with this mix of religion & slasher movie providing all the mystery & revenge you could ever want in a horror comic. 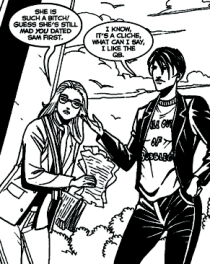 The cast are well developed and while they may appear on the surface to cover your cliched mix of who’s who in a slasher group – there’s smart use of the elite that you love to hate and the rebels that steer clear of the group and are content as outsiders.  There’s a bit of an obvious reveal in the closing page but I’m pretty sure that things won’t be as clear cut in this title – John likes messing with peoples heads anyway.  The artwork from Rodolfo Ezequiel (pencils), Christian Sauret (Inks) & Juan Hernandez (Ink assist) help bring the small-town America vibe to life as the detail manages to capture the mystery & gruesome murder scenes well.

A smart, savvy plot that combines the elements well and an interesting mix of religion & murder that’s sure to bring with it some much expected controversy but after the likes of Royal Descent already stirring that kind of response, I’m sure John is looking forward to it. Another addition for my “must read” AND “must recommend” lists which I’m sure people are now getting sick of :D.

Keep up to date with Vital Publishing’s releases and appearance in the latter half of 2015 over on their Facebook page and as well as HorrorCon mentioned earlier you can see them at MegaCon (15th August), MCM Scotland Comic Con (19th-20th September) and Thought Bubble (14th-15th November).