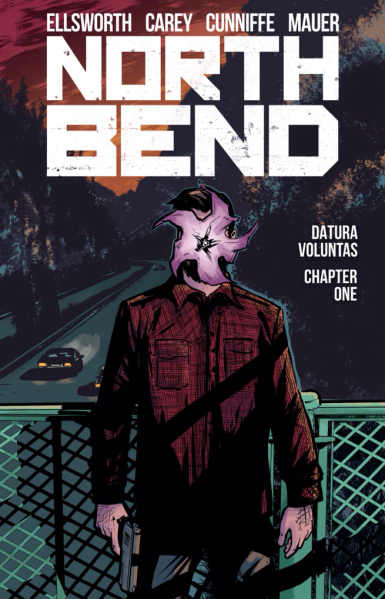 Creator/Writer Ryan Ellsworth’s North Bend is a title I’ve seen and just never had the chance to catch-up on but it seems like now is the time to rectify that.

It takes place in the not-too-distant-future as the US are war at both home and abroad and it seems the CIA are desperately helping to veer it away from economic collapse & political revolution.  The story has three distinct plot-lines with the CIA’s plans beginning to become clear, an experimental drug reaching a key moment and the undercover war on drugs reaching a crucial point but that all merges into a bigger plan for the greater good…..at least in the eyes of the CIA.

DEA Agent Brendan Kruge is fresh from the field and his specific skill-set has him in the CIA’s sights for their big plans.  Drug tests on the unsuspecting public is the order of the day and a controlled experiment in the field is where they are placing their bets for gaining control of both the population and the world.  Ethical reasoning set aside and with a much stronger link to reality than we may have first expected, this quickly becomes a comic book thriller with real weight behind it.

Ryan’s script is a hefty one and on any other subject matter the amount of narration & dialogue would just over-power the whole thing but it’s a story that needs the level of detail he’s pouring into it.  Robert’s art is charged with the suspicious atmosphere you’d expect from a thriller and the tones in Dee Cunniffe’s pallet makes it feel more real world than comic universe.  Kudos to Thomas Mauer for his lettering work on this one too as he does a cracking job on fitting it all in while not disrupting the flow ro tension being built up.

North Bend ends up being a glorious opener with the creative team working in sync to keep the CIA world of secret drug plots gritty, plausible and highly entertaining.  The most surprising thing for me on this is that it’s not a mainstream title…..it oozes so much potential and real style from the team involved that it has “big time publisher” written all over it. More of this please.

You can get more info on what’s next for North Bend over on Facebook & Tumblr and you can catch-up with what else the creative team are working on over on Twitter: