Michael Nelsen brings us a sci-fi story that follows Stephen Haddon’s transcendence from lunar astronaut to the time & space crossing Supernaut in probably one of the most complex comics I’ve delved into in a while.

Supernaut’s main aim is to head God off at the inter-dimensional pass to save all of time & space from being completely unravelled and reset on the whim of a so-called deity.  A powerful theme to tackle and while it builds an instant complexity that will be daunting for some to tackle….it’s well worth taking the plunge.

That basic plot brings us deeper into Supernaut’s mish-mash of worlds as he scrambles through history and across planets to get his hands on the key artifacts & weapons that he’ll need.  He’s not alone on that quest though as his team of extra-dimensional thieves are on hand like an otherwordly A-Team who are tackling monsters, aliens and conscience thought itself in a bid to save the day.

The hint of world events helps anchor the story to a familiar version of Earth but the fleeting time in this world seems to be mainly messing with the Supernaut’s head and distracting him from the team goal of stopping God’s latest plan for reality itself.  They do make progress on those artifacts across these initial issues and Michael does a phenomenal job of juggling the multiple themes & ideas he has poured into this title.

The visuals are a stand-out element of the release though as the scale is beyond imagination and yet he manages to develop just the right amount of detail in what we would expect from the known & unknown universe to make things work.  There’s some slick changes of tone for the historical segments and the character introductions and updates along the way are perfectly placed to prevent this being dragged down into too much techno-babble. 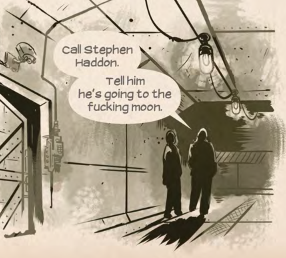 That being said, I’d expect some readers to dismiss the complexity of Supernaut if they just base it on the opening issue…..you’ll need a run of issues for it to start making sense.  It’s got some huge ideas in it and after the first three issues my only concern would be that a five issue run may be too short to get a full idea of the story without cutting corners somewhere.  I won’t judge it too soon though as after three amazing issues I’m hooked and keen to get the next two.

You can get hold of Supernaut over on Comixology now and you can find out more about the title over on the 215 Ink website, Facebook & Twitter pages.