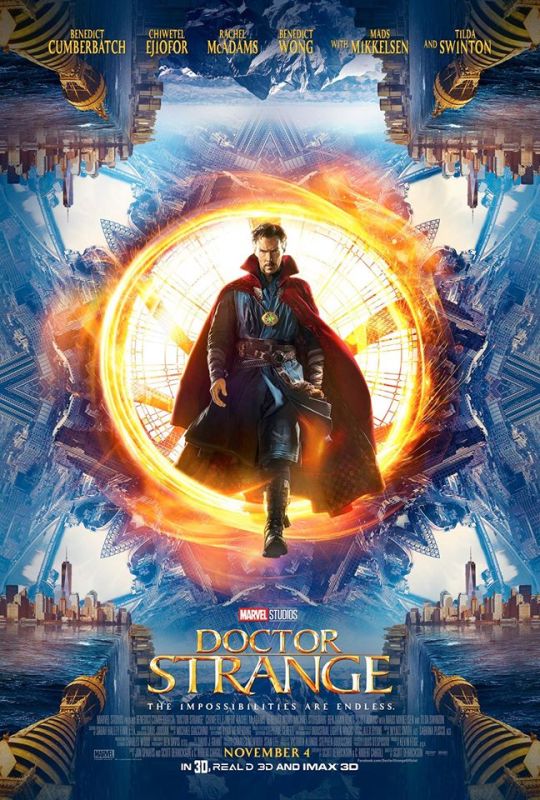 This week saw the UK release of the latest addition to Marvel’s Cinematic Universe with Doctor Strange making the step from comic book panel to cinema screen but would the introduction of another lesser-known character work as well as the previous introductions of Guardians of the Galaxy & Ant-Man?

The first thing about Doctor Strange is that, on the surcface at least, it’s a very different beast than anything Marvel have introduced to the Big Screen and while the core story of uber-rich neurosurgeon Stephen Strange hitting rock bottom after a serious car accident robbing him of the use of his hands almost slips into the “bog-standard” category for an origin story the progression from there is far from normal.  Plowing money into as many operations and procedures as he can to save his now cumbersome hands he’s soon looking to the rarest cases of recovery for inspiration and a possible solution to allow him to get his life back.  Cue a trip to Nepal & the study of mystical arts where the skeptic soon becomes a student. 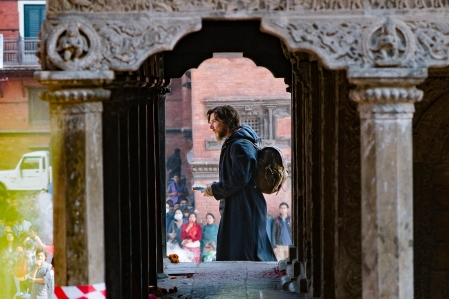 Fairly straight-forward in essence but taking things away from the world of Superheroes or even the Galacticexpanse of Space and into mystical arts & other dimensions has the definite air of risk about it for Marvel as they broaden the characters they offer from an endless roster of possibilites.  Is Dr Strange the right step to take?  I’d say Yes and that’s due to the progress they’ve made already with their movies and more recently their Netflix TV series and surprisingly enough Benedict Cumberbatch was a far better fit for the main character than I was expecting.  He nails the ego & arrogance of the neurosurgeon perfectly before descending into his desperate phase with relative ease and the first act of the movie is a compelling slice of real life dealing a rough hand (no pun intended).

Easing into the second half there’s a shift as the magical elements creep in and for me this is where it took a slight dip.  The rise from the mystical depths like a magically empowered phoenix seemed to come a bit too quick and easy for my liking which makes me sound like a bit of a dick but it was really only missing some Rocky music and you had a montage.  Mastering the mystical arts came down to reading a shitload of books & being dumped on Everest for 20mins until you “get it” and that seemed to take the edge off the fact he’d earned the right to be more than the man he was but the Sorcerer Supreme in waiting. 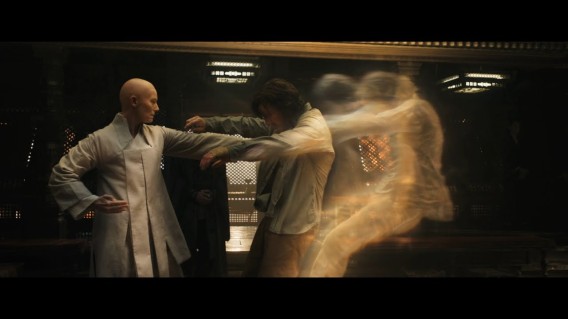 That’s not to say it was all downhill though as Dr. Strange’s supporting cast of Mordo (Chiwetel Ejiofor), Wong (Benedict Wong), The Ancient One (Tilda Swinton) helped bolster his efforts some and the injection of humour here & there ranged from a matter-of-fact comment or slapstick moment but in the context of the story it did make sense albeit some of them feeling a little shoe-horned in.  Christine Palmer (Rachel McAdams) manages to be the anchor to the real world for Stephen but I thought she was massively under-used as she appeared in only a few scenes.  The visuals take a mind-blowing step up in the second half too as some “screw you gravity” moments flow across the screen as dimensions blend together and all as villain Kaecilius (Mads Mikkelsen) sees his plan for eternal life come closer to completion with the aid of a higher power.

It’s this area that highlights a weakness in Marvel (and most other comic book movies) as the villain becomes an under-developed & under-used element of the story which negates the threat they actually represent.  It’s not a complete show-stopper by any means but it means the movie as a whole ends up falling short of being an ‘amazing’ addition to the MCU as it instead settles into the ‘good’ category.  I’m an eternal optimist though and the good elements far outweigh the bad for me – Cumberbatch is an impressive lead and it does represent a move into other realms for Marvel which I might not have expected them to explore a few years ago, the visuals have to be seen to be believed and the strong supporting cast around our main hero elevate this well away from becoming a failure.

Time will tell if the risk of making a mystical, fringe character far more mainstream has paid-off but it definitely feels like it for me.  Writer/Director Scott Dickerson has taken a Marvel character I was never really interested in and got me hooked on the idea of finding out more and he’s done that with a story that’s injected a new source of potential into future outings for Dr Strange AND the other MCU characters.  It’s not perfect with some of the flaws I’ve mentioned but then if you’re a fan it doesn’t have to be when it’s as accurate a portrayal as this and for anyone who is new to the character the plot does just enough to be able to make this accessible.

Go check it out for yourself though as it’s on general release in the UK now and due to hit the US from the 4th November (other release dates over on IMDB here)…….and as usual you haev to hang back for those 2 extra scenes during & after the credits.

1 thought on “Comics Anonymous at the Movies – Doctor Strange”