Patrick Scattergood co-founded Dark Pond Creations who have some amazing titles out like The Meek, Flesh Tones & Morbid Detection that have already impressed with their dark but poignant themes resulting in stories with depth & heart.

What was the first title you worked on?

Originally, I had written two short stories in the hopes that they would be good enough to be included in a horror anthology called The Geeky Book of Horror. Sadly, for various reasons, it didn’t pan out but through writing the stories, I became friends with a superb artist names Lee Taylor.

As Dark Pond Creations readers will know, Lee is the artist behind the story The Mansion that appeared in the first issue of Flesh Tones. What some people may not know is that that story is the first actual comic book script that I had ever written. To this day, it is still one of the stories that I am most proud of. It managed to include a sense of dread, of romance and of the fragility of life while having a subtle charm thanks to the superb work by Lee. It was through this project that I also became friends with Carlos Moreno, my co-founder of Dark Pond Creations, and that’s how our team of merry, indie comic making misfits came together.

How has your work changed since then?

One of the things that has changed the most about my work is my confidence in both the writing and the pacing of the stories, which I sincerely hope shows through in the stories themselves. The growing confidence has also helped me to want to write more than just horror stories, which actually stems from a wonderful review of my work that I read a little while ago. When describing my work, I was touted as an up and coming horror writer. As flattering as that is, I don’t want to stay in any one genre as I believe the best writers and creators out there are the ones where they find themselves at home with their writing no matter what the genre.

Who are your main influences?

As utterly pretentious as it sounds, I really can be influenced by pretty much anything. That said, if we are talking writing wise, a lot of my influences come from writers such as James O’Barr, Neil Gaiman and Terry Pratchett. To me, those three writers can take looks at the world around them and give such unique perspectives that you can notice something new each time you read the books. Art wise, my influences can depend on how my mind is working at any given moment. My favourites are the wonderfully talented Duncan Fegredo, Dave McKean, Quentin Blake and more. I also find myself being heavily influenced by music while I’m illustrating my work. Artists such as Prince, David Bowie and Freddie Mercury really fire up the imagination when I’m drawing.

What comic books are you reading right now?

I tend to read a lot of different comics and graphic novels but I don’t really stick to any particular theme or genre. It’s literally whatever takes my eye at the time.
I’m currently rereading one of my favourites of all time in The Crow by James O’Barr. I swear I will never get bored of it. I’m on about my fifth copy of it. I’ve also been writing some superb indie comics. There’s a wonderfully subtle and heart warming story called ‘Seen’ by Kate Beaumont from Cosmicmind Comics. I’ve also read ‘Jackboot and Ironheel’ by David Millgate that has a Mike Mignola feel to the art and an almost ‘X-Files’ feeling of dread to the story. I also have read ‘Kids’ by Martyn Rotherham and Helen Holderness from Square Orange Art and ‘X-Scream!’ by Paul Kemble from Stencroad Comics.

There are many absolutely brilliant things about making comics actually. One of the things that I like the most is the sheer amount of people that I have not only gotten to know but also gotten to work with on various projects. I’ve also loved seeing the reactions of the people that come to our tables at conventions too. It’s kind of a weird feeling because I suffer with hugely crippling social anxiety but it’s worth it when people of all ages come up and say that they have read your work.

I have to admit though that the absolute best thing is seeing a story come to life. To me, it doesn’t matter if I have written it and another artist is illustrating it or if I’m illustrating it myself, it’s still a brilliant feeling.

What are you working on right now?

I’m actually working on quite a few projects at the moment. I’ve written a story called The Ballad of Cassandra, which is set in a travelling circus. It’s being drawn by Carlos Moreno, known for our series The Meek, and I’m also handling the letter duties on that one. 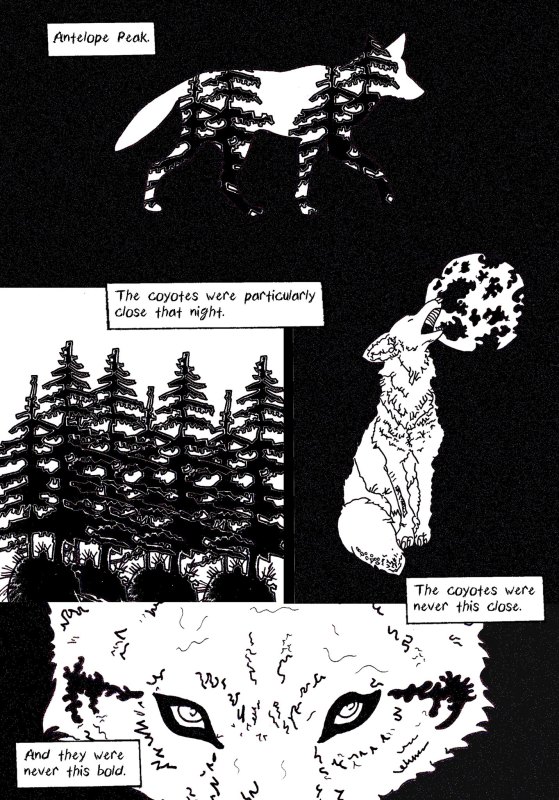 I’m also illustrating a story from a new, up and coming writer called Golda Evans. The mini-series is called The Coyote of Antelope Peak and Golda has done a superb job of creating a series that combines both the slow building dread of the show ‘Twin Peaks’ as well as the twists and turns of Chris Carter’s ‘The X-Files’.  I’m handling lettering duties on a story called Venereal’by Stephen Deighan and Beth Godfrey, which is one of those sorts of stories that you have to read to believe.

Where can we see you next?

I’ve got a few conventions lined up this far and hopefully more to come.
The most recent one is the charity event called A Geeky Mind that will be held on August 12th at Hansom Hall, Leicester. We’re hoping to raise as much money as possible for a wonderful mental health charity called MIND, which is a charity that is very close to my heart.

You can check out more of Patrick’s work over on his Facebook page and get over to his Etsy store to get your hands on his art.

You can also catch-up on what’s happening with Dark Pond Creations over on Facebook & Twitter, as well as getting hold of their titles over on Sellfy & Etsy too.