The flow of titles coming from Afterlight Comics has seen it’s founder Joseph Oliveira inject consistency into a series of indie comics time & again……and I was overdue a catch-up on the most recent of these.

Joseph’s first foray into the indie comic world saw him kick-off a gruesome story that has narrowed it focus onto Psychic, Joshua Evans, over the last few issues and with this finale we get to see just how his life has been manipulated.  The casualties and revelations have continued as the group has gradually seen everyone’s true colours and we’re still caught off guard by the revelations that unfold here.  Joshua’s past, present & future all seem to have been tied to the island and the people responsible for it without him even realizing and that’s a stark realization to a man with is abilities. 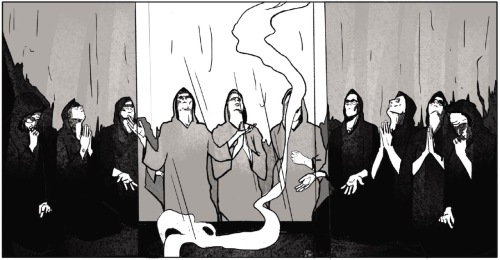 It’s been a dark ride from the beginning with this one but with each issue you can see the progress Joseph has been making as he builds a world, forms characters and influences the reader which has been impressive to see.  A quirky idea has given way to a much deeper look at the manipulation around Joshua and with the latest revelations pretty much blowing your mind and some quirky decisions by the core survivors later –  its clear that Ghost Island has ended on the high that had been promised from the beginning.  Great work from Joseph on the lettering again too.

The visuals have taken a similar trajectory as Anabela Turlione has kept things grim & gruesome enough to make the gut punches hit home and edgy enough to keep you guessing along the way and it’s another top cover from Dominic Ratho to polish things off.  All in all a solid series that gave us a glimpse at the potential that Joseph, is collaborators & Afterlight Comics itself had from the beginning but then followed that up in this (and pretty much every other series) with some indie books to get lost in.

Following on from the Rise of the Goatman we return to the same universe with the fallout from that first issue now being explored from the perspective of Detective Garcia.  His task to investigate the mysterious goings-on in that cabin in the woods brings him firmly into small-town America before thrusting him headlong into a far more sinister discovery of what exactly the Goatman is.  The help/hinderance from the locals is not exactly what he needs when he’s aiming to solve a case but it increases his drive and he sweeps you along with each discovery he makes.  The reveal comes as a bit of a shock but the relentless nature of this unstoppable force makes sure that the intended one-shot that started this story had the potential to go on and add more mystery to what has become a favourite of mine.

Joseph’s writing is on point in this second installment of a now three-part story and with him taking on colouring & lettering for this one too, you can almost see his own drive to make this as good as he possibly can.  To that end, the stumbling blocks & reveals hit home as they need to and while there’s a lot of dialogue in this one it’s kept compact enough to not slow down things at all for me.  The artwork from Adrian Manuel Garcia is just as detailed and engaging as it was in the opening issue with an injected feeling of familiarity in those characters faces that only helps keep the attention.  Joseph’s colours on top of that keep the moody vibe firmly in that unsettling category which rounds off a solid creative team that are on form.

Goatman probably caught me off-guard with it’s opening issue but the Afterlight banner was enough to interest me in it and then this second visit makes sure that the quality that was there is matched and bettered.  Can’t wait to see what happens with this one next.

While Afterlight have been producing a flow of steady titles of their own the addition of this Horror Graphic novel seemed to be a natural step for a publisher that’s already got a solid foundation in the indie scene and the response to it’s funding campaign was a clear indicator that it’s popularity was contagious.  It tells the story of Carl O’Malley who has a lifetime of troubles behind him that have helped form him into a loner with an unsettling view on love & life in general.  We’re drawn into his psyche by writer/artist Jorge Jaramillo as he unfolds each detail around the world Carl inhabits with an effortless sense of timing.  The shocks, the surprises & a subtle sense of empathy towards him grows as the complications of his upbringing give him some tangible reasons for being the way he is and with the arrival of a new neighbour who has a similar trait, the gruesome relationship takes us deeper into a shared level of normality that’s both brutal & scary. 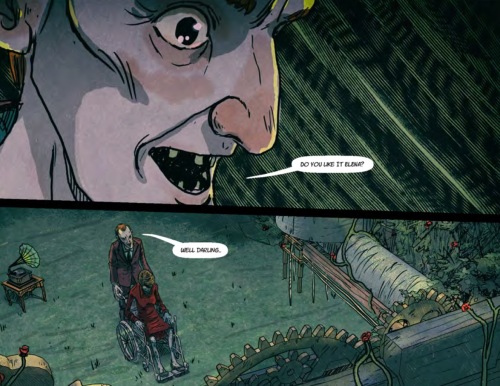 The introduction of the detectives that are on both their tails give things a nice sense of cat & mouse that quickens the pace of the story and with more surprises on the way as a result of that, I’d be hard pushed to name book that manages to be this captivating from the very beginning.  The work of Jorge on story & art is key to that as there’s an impressive level of detail poured into the characters and the grim events that we see depicted but with the level of detail it’s also easy to capture pain, anguish & even love to contrast against those darker elements.  Ana Sanchez & Luis Fernando Mora join him on lettering and while there are some heavy sections of dialogue it’s kept under control enough to prevent it from stifling the flow too much.  In fact, the only criticism I would give this is that the lettering could be a bit bigger as it was a strain to read on some sections but thankfully not enough to stop me in my tracks.

A gruesomely detailed slice of horror that nestles nicely under that Afterlight banner but with a whole range of emotions conflicting the views of Carl himself it’s been easy to see and almost justify the way he is in my head.  The story gives him a glimmer of hope that takes the edge off the more visceral moments and with the portrayal of the Detectives and victims bringing with it an incredible sense of humanity the whole book feels like the kind of thing I can read and re-read with ease.  My Kickstarter backing has drifted towards digital for space reasons but it’s books like this that make me reconsider that and at least for this one……I’ll be trying to get myself a hardcopy.

You can get more info on their titles and news on what else they have on the way over on the Afterlight Comics website, Facebook & Twitter pages.

You can also get hold of the collected edition of Ghost Island on the campaign link below: