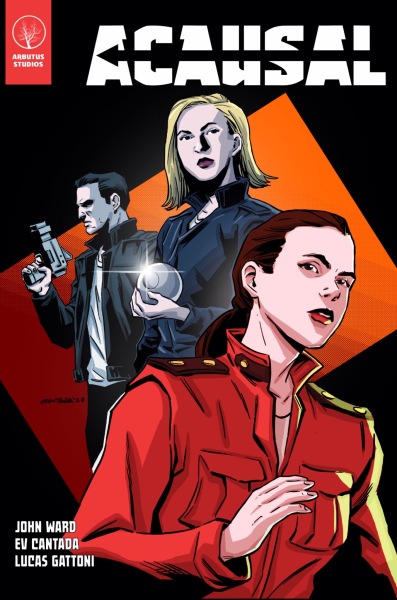 Acausal is the newest book from John Ward and getting an early glimpse of it was something I jumped at straight away.

It’s a crime comic with a solid injection of Sci-fi and we follow RCMP Office Tara Becker heading headlong into trying to stop a bomb AND stay on the right side of the law while doing it.  It’s a frantic beginning for her and us the reader but when the finer details are revealed of what she has found herself embroiled in, it quickly becomes apparent that the balance between crime & sci-fi is a plot direction that swings one way then the other.

The details around her quest to save the day and more importantly around the exterior forces that are seemingly orchestrating the whole thing brings with it an ever-growing mystery that includes elements of her past, her present, her future, her current role as an RCMP officer and even her own dead husband but the pacing from John is crucial in making sure that every detail has a part to play.  The breakneck speed it opens at and then the momentum that continues helps ease any concerns over the amount of dialogue or narration that’s poured into the pages and it ends up being a slick combination of knowledge sharing and just showing you what’s unfolding.

The details in the art from Ev Cantada suits the shadowy world that’s exploding across the pages and the detail in the characters and surroundings make sure that an engaging story is as eye-catching as it needs to be.  In a similar vein, the lettering from Lucas Gattoni goes a long way to keep the amount of reading under control and breaking that up with a well placed sound-effect and keeping it as tight as possible proves to be just as significant a piece in the whole experience of this opening issue.

John’s central protagonist Tara has the swagger & attitude to carry the whole story but an interesting array of new team members and even occasional extras, gives the world a nice natural feel to it and given that things veer off into messages from the future and their repercussions, it’s clear that a multiverse of possibilities has already been carefully considered.  The look & feel of the book then allows things to unravel at a pacing that seems somehow fast but just right for giving us a book that’s as far away from a brief, throwaway read as you can get.

Hints of Minority Report or even Quantum Leap in the more sci-fi heavy moments means there’s a definite feeling of some challenging ideas in the mix but even with those elements it’s a book that’s got the creative team to pull off any direction things may take.  Roll on that second issue!!

You can get hold of a copy of the opening issue through the campaign link below:

Also check in with the creators involved through the Twitter links below to see what else they’re working: