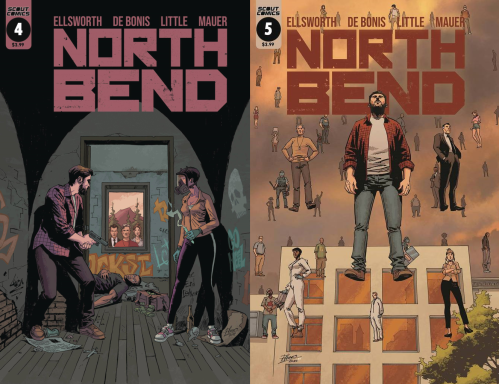 After jumping on-board North Bend from Ryan Ellsworth over on Kickstarter I was glad to hear that it found a new home at Scout Comics and with the latest issues we see the title ease into the end of it’s first arc.

The layers have been built up nicely over the previous issues and with all the players seemingly in the midst of the task they were purposed with it seems like the intricate workings of the government are still trucking along.  Those smooth plans have hit a major bump though and the development of their new drug could all be derailed with a combination of some nosey neighbours, an overdose and the wrong decisions & the wrong times. 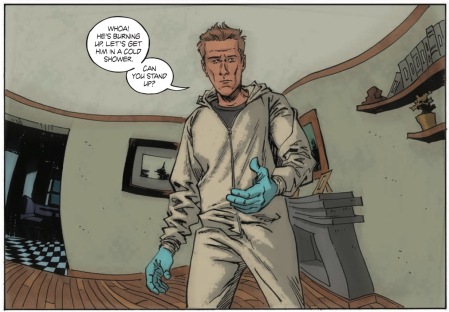 The wheels of government have a cruel & twisted streak in them though and a new opportunity gives them a new option in getting that drug tested & on a much bigger scale than they could ever have hoped for.  The typical government power struggle mixes with all the usual tropes you’d expect in this but with layers of sci-fi, thriller and those cold war elements all placed exactly where they need to be there’s no doubt that Ryan was onto something when he first hit Kickstarter with this title.

The pacing has been solid from the off and with there being surprises and cliffhangers dropped into the mix along the way it’s been able to sustain it’s positive momentum from issue to issue.  Backing that up has been some great artwork across the whole series and with Pablo De Bonis taking the reins from the third issue he’s managed to keep things suitably consistent while adding his own sense of style to things.  It’s been much the same story with colouring from Paul Little too as the moody opener has kept the gloomy edge to all the proceedings and that has really helped build the atmosphere around a set of central characters who have grown into their roles and reached a place where they exude their own sense of depth.  The lettering has been a key thing to the whole series though and with Thomas Mauer’s input he’s managed to keep the volume of dialogue & narration under complete control.  That amount of text has been crucial in giving the series a strong sense of realism though, as it plays its part in forming the world & characters contained within the pages.

North Bend feels like a release that’s grown from the spark of an idea and from it’s almost humble beginnings on Kickstarter it’s rightly got a place in the mainstream through Scout Comics.  I was fortunate enough to catch it at those early stages and having seen the story evolve & unravel in these five issues it’s been a joy to read a book that’s been a much needed change of pace in among my regular pull list.  An intelligent book that’s gained traction thanks to the creators involved and with each of them pulling their weight it’s a countdown to the collected edition arriving in January and the future issues we’ll see after that.

You can check out this and the other Scout Comics titles over on their website and keep an eye on their Facebook, Twitter & Instagram pages for more news on what else they have coming out soon.