Having recently had an early look at the first collected edition of The Secret Protectors I caught up with creator Adam Wheeler (on the right in the picture above with artist Ben Nunn) to talk more about it.

What was the inspiration for The Secret Protectors?

For the comic itself I’d say the inspiration came from years and years of digesting great storytelling and some not-so-great storytelling. Not just comics though, film, TV, anime, manga, books. As I’ve gotten older I really appreciate character growth, story and lore. So, the idea for the comic was to integrate a strong narrative with lots of ‘moving parts’. One our tag lines is ‘A conflict, thousands of years in the making is coming to a head’. That isn’t just for effect. 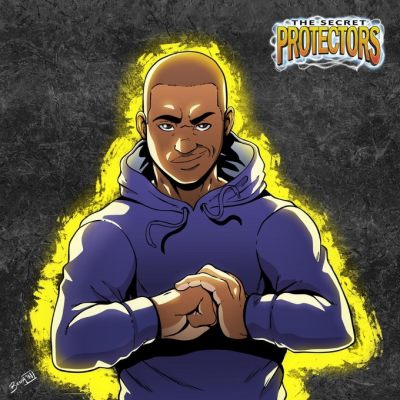 Our story may pick up with Benjamin Banks in 1982 but, as readers will see, this world is far more ancient. As for the team dynamics and make-up itself, the old school Chris Claremont X-Men team was a huge inspiration for us. We wanted to bring together an eclectic group of characters, all with their own personalities, skills and flaws. Throw them all in together and see what happens! How they co-exist! How they cooperate under pressure. Whether they can retain their humanity.

Were you wary of bringing a superhero book into the Indie comic world?

Yeah, we probably didn’t pick the easiest genre. We started this back in 2017, just as just two guys with a dream of making a comic. This was the story we wanted to tell! Looking back, with the benefit of hindsight, it certainly could have been easier not to do a superhero comic but then we also wouldn’t have been true to ourselves or the story. This is a superhero story! We believe it’s a great one! A unique one! One that’s worth telling. We’re also kind of unique, funnily enough, as an indie superhero comic.

How did the creative team form?

By complete chance to be honest! I had a lot of these characters and story in my head for years! Decades in fact! I’m not an artist though, so I didn’t necessarily plan on ever getting it made. It, the idea, just started gnawing away at me. Day after day, year after year. It became all consuming! I’d stay up late into the night guzzling coffee and typing away! Planning it all out! Writing it all down! Hoping that once I had documented it all that my mind would let me rest. For a while it did but then that gnawing started, again! And, again, it’s all I could think about! So, I decided I had to give it a try. If I tried, I could live with it! Even it failed miserable, I could live with that because I had given it my all.

So, with my mission statement in mind I started looking for artists! Someone who possessed the skill set to bring the story to life! I found Ben Nunn on a website. I really liked his style and thought it could suit the look and the feel of what would become ‘The Secret Protectors’. Eerily, Ben lived about five minutes away from where I had recently moved to and his name was also Ben, just like our series primary protagonist! It felt like some kind of thing approaching fate or destiny. Thankfully we got on really well from the start and bounced ideas off one another and then three years and four issues later and here we are! With our first completed Volume! It’s flown by! 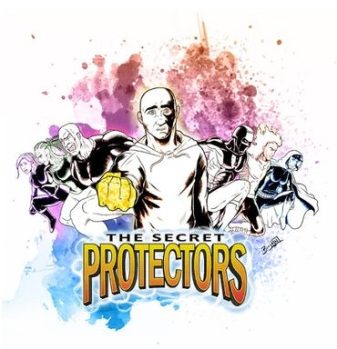 Do you have the full series planned out?

Absolutely! The first story arc will run for around 10 issues! I say ‘around’ because that’s the target we’ve set ourselves for this arc. We’ve got more in mind. In my head I’ve got probably around 6-7 full additional arcs that I’d love for us to play out and explore but first and foremost it’s about making our comic today the very best it can be! Hopefully, we’ll continue to build more of a following and our story will can continue for years to come.

This is our second campaign on Kickstarter. Our first one was successfully funded but it was also a really great learning opportunity! This time around we feel far more prepared. As for the reaction, it’s genuinely been incredible! I’m always blown away when either returning fans of our work or those new to us commit to backing our project. It’s the ultimate endorsement. I’m not sure I’ll ever get used to it. It’s honestly amazing!

Was making the team diverse always an important part of the series?

It was, yeah. When we started doing this back in 2017 the world was in a different place, politically. It wasn’t necessarily an agenda or anything like that, we just wanted to have this diverse, eclectic cast of characters. We wanted everyone, especially younger readers, to have the opportunity to see someone who reflected themselves, I think that’s important. It all goes back to Claremont really. The way he shifted that team dynamic of the X-Men.

I’ve got a few ideas I’d like to explore! I love to explore different ideas and genres. I wrote a short story a while back about a prisoner being released from jail, just because I wanted to write something completely different to this. I’ve written a few TV pilot scripts too. I’ve got a horror / thriller idea I’m working on as well, it’s all just dependant on having the time to do so!