The latest release from Joe Glass sees him bring us a book that’s described as “a queer grindhouse, glitter noir revenge thriller for all!” and that was enough for me to want to find out much more.

What was the main inspiration for Glitter Vipers?

Honestly: anger. It started with just reading far too many news stories about violence done to queer people, just for existing. People getting beat up on buses, getting acid thrown on them – all just for who they love or how they live. This world, especially lately, feels broken for some people, usually the most vulnerable among us, and it can feel like those meant to protect us are failing or actively participating. And it makes me angry. So angry. And I think a lot of people feel the same way.

Have you had this story in mind for a while?

A little bit, yeah. Probably since around 2018, maybe 2017. It took a little working out exactly how I wanted to tell this story, and then of course finding the perfect people to tell it with. Then also because I wanted the experience and with such sensitive topics having another set of eyes cannot hurt, I really wanted to have an editor on it, and finding a great one in Ted Brandt just became the final piece in the puzzle really. 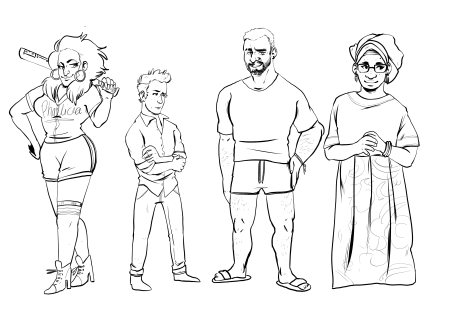 What can we expect from this graphic novel?

Well, think it like a queersploitation revenge grindhouse flick, but with a kind of glitter touch that takes the usual tropes of seeing the minority main cast players being angry and taking this uber-violent revenge and looks at it with a slightly modern lens, exploring that anger, it’s justified existence and the right for those victimised by hate and systemic violence to have it, and how using it can help and heal, and in what ways. In other words, it’s kind of thoughtful at times but also a lot of angry, punch fascists and bigots in the face fun. It’s the joy of seeing a homophobe smashed in the face with a sequined baseball bat.

It’s a timely release given the different LGBTQ+ themes you’re covering – was it always the plan to tackle some of these bigger issues?

I know that all my work I want to explore queer issues of my community and our interactions with the world. I also want to tackle wider issues, and I do, but I have a focus on these issues as they still don’t get the platform and respect they should in this medium sometimes. And hell, if they want to make me ‘that gay writer’ then I am more than happy to lean into it.

As for exploring the idea of queer rage, yeah it’s something I wanted to tackle for a while and Pride didn’t necessarily feel like the place to do it. I needed a space that was more honest, more real, even with the touch up of a biodegradable glitter blush to soften some of the edges. Pride is not a comedy, and doesn’t shy away from issues, but it’s a fantasy. This stuff is a reality, so it felt right to take it in a new project. 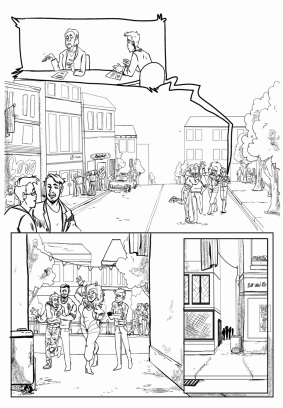 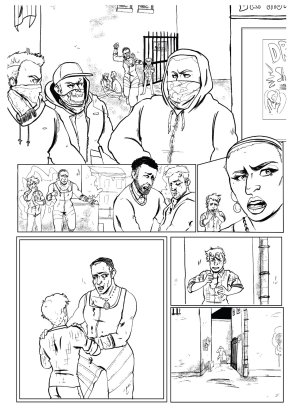 Do you have a favourite character to write in the book?

Definitely the drag queen leader, Bi Phallicia. Also, we have a trans woman named Queenie who has a wonderful voice, and Jesus’ very visceral and very justified anger felt kinda cathartic to write.

How did the creative team come together?

Oh god, I’m always awful at remembering who emailed who first etc. I probably put a call out on twitter for most of the team. Ted I saw him offering his services as an editor, and jumped at the chance. I think the main thing was I wanted to make sure the creative team on this one was all queer. As a way of having all these different eyes reading it through different aspects of the queer lens and hopefully coming up with an honest, true expression of what we’re going for.

Do you have more planned for these characters after this?

Probably not. This story is pretty much self-contained and it feels like I may say all I want to say in the space of this novel. But never say never. Certainly, anyone considering now but wanting the assurance of getting a complete story in one sitting, that is what you’ll be getting with this.

Right now, I have a few pitches out there that I hope will happen. A body horror, a psychological horror. Obviously more Pride stuff, and it feels like that keeps growing by the day lately. I also think I know what the next project will be, whether it will be for the full run or just do a campaign an issue at a time, I haven’t decided. It’s for a superhero project, which these days I’ll mostly just make by myself and Kickstarter because publishers love to balk at independent superheroes, by and large. It’s called The Miracles, and hopefully I’ll launch that later this year, but I want to get Glitter Vipers out of the way first.

MASSIVE thanks to Joe for taking the time to talk about his newest project where he’s joined on the book by fellow creators Katie Fleming on art, Kelly Fitzpatrick on colours, letterer Lucas Gattoni & editor Ted Brandt, and it comes with a stunning cover by James Gifford & glittering logo from Spire Eaton.  That’s quite the team he’s pieced together for this one & you can catch-up with each of them over on the links below:

The book has just launched its campaign and you can jump on-board through the link below: