Rol Hirst & Robert Wells brought us the first two issues of the Department of the Peculiar back in the early 2000s and after putting the band back together a few years later, they’ve got another two-part story to tell.

This first issue brings together the misfits that make up the members of the department who all use their own abilities to predict, contain & resolve strange cases of other powered individuals up and down the country – they call them ‘peculiars’.  The return of a team-mate (& witch) into the Department helps strengthen their numbers and while the group dynamic is still evolving they don’t have too much time for niceties when the latest case of another individual using their powers hits their ‘to-do’ list.

Gavin Leech is the man with a new-found power and as the manager of a band that have been aiming for success for years, this new talent he has is something he funnels into his attempts at greatness for the band.  It’s not a pretty power this ‘peculiar’ has and with a rising bodycount the team’s actions have to be quick and precise but the writer Rol builds us up to a cliffhanger that comes like a slap in the face……but one that makes sure you can’t help but hope to find out what happens next.  There’s a cracking 4-page prose story that adds another layer to the whole world they’ve created and the addition of some pin-ups by some recognizable names is a nice touch to round things off.

The writing from Rol in this first ‘goes Pop!’ issue is a slick jumping on point with the introductions made before the story gets underway although I firmly recommend going back to read those first two issues from 2012 & 2013, as they still hold their own and help emphasise the departments history.  Here the group is allowed to take it’s first big steps in becoming established and between the mix of personalities that grate on each other and the subtleties of the humour, side-gags & interactions, it all plays out with a surprisingly natural flow to it.  The ‘making it up as you go along’ vibe is there with each step they take but there’s something comforting in that fact given how strange their cases turn out to be. 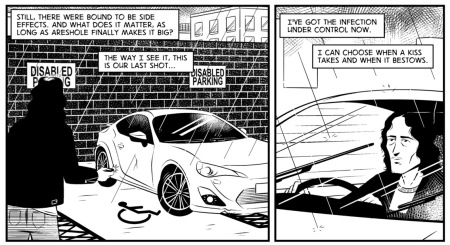 The art from Robert shows a definite sense of progression and in this first issue of their new arc is a showcase for that when compared against some of the rawness in those previous issues.  The use of background spaces for subtle in-jokes is a nice touch along the way and it shows an awareness of the world around the characters as much as the main players themselves which ends up giving the whole team & issue a well-rounded appeal.

The idea is given a real freshness with the subtle plot & slick art and in this newest issue I can see why they chose to come back to show us some more and while I’m not sure if we’ll see more beyond this latest ‘goes Pop!’ two-parter, there’s still a world of potential in this creatives team armoury.  Fun from start to finish, albeit dark and messed up at times, this department has room to expand.

You can get hold of the previous Department of the Peculiar issues through the online store or get a free digital copy for the duration of the lockdown here.  You can catch-up with both creators through the Twitter links below too:

You can get the second part of this arc as well as all that’s gone before through the campaign link below: