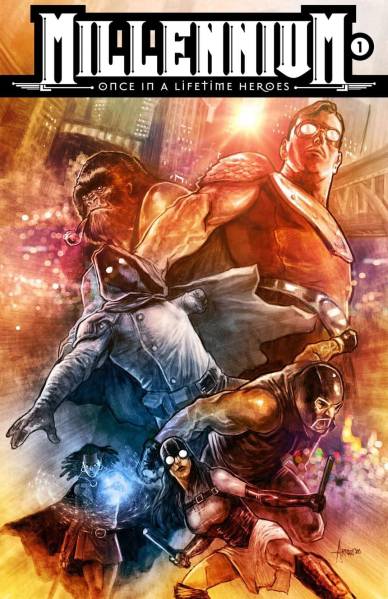 Skeletal Press will soon be releasing their new book Millenium, and I jumped at the chance to get an early look at it.

Creator/writer Ryan Cummins already impressed with his Rumble Kings title and here he brings us into a new pulp-era superhero world that opens in the icy fjords of Norway as an expedition gets closer to it’s goal.  The team find exactly what they were looking for but the elation is short-lived when their discovery turns on each & every member of the recovery team.  Cue a flashforward of a few days and news is beginning to spread in the US of the discovery and it’s fall out with some key players beginning to take notice. 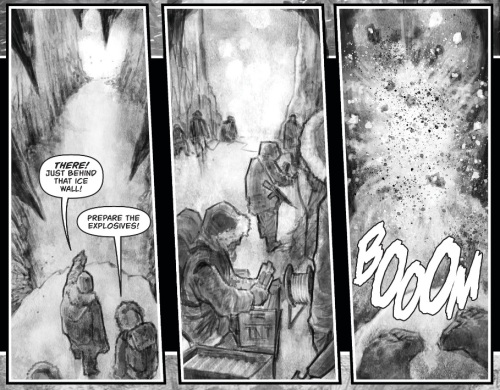 The news of Nazi involvement has triggered the expected red flags and the only person able to tackle the problem is the person who hid things in the ice in the first place – The Guardian.  The retired superhero is in mind for coming back into the spotlight to head up a new team and bring this resurfaced evil under control and before you can say “We’re putting the band back together” we get a glimpse of the whole roster of top picks for the other members.

Mainstream comics are already saturated with superhero stories and while some try to follow in their footsteps in the indie world it feels like there’s just a few that can find a place in the sea of books already out there.  Millenium could well be one to join the few in that category and while there are a number of recognizable superhero tropes across those pages Ryan has still been able to inject a sense of freshness into this opening issue.  The dialogue between old acquaintances holds the weight of familiarity and the set-pieces are timed just right to have the biggest impact to the overall story.  There’s the added bonus that it’s a fan of pulp characters doing the review but it does feel like there’s something more to this than just that.

The visuals from Erwin Arroza have to be seen to be believed as they capture an era with that unique blend of technological advances & have-a-go hero positivity that sweeps you up and brings you along for the ride.  He capture those big brutal action scenes & the face to face conversations with the same level of detail to give each panel it’s own significance.  Similarly, the lettering from Justin Birch helps balance out the need for conveying the details in the dialogue with letting the art shine as the story unfolds.  Kudos to Kasey Pierce on editing too as things all flow well & fit together nicely to give this new series the chance to get off to the best possible start.

A new superhero book could well be a hard sell but the execution here separates it out from any number of similar books that are already out there and if it can sustain the tight scripting and the stunning visuals it’s got a great chance of delivering on it’s potential.  This pulp fan is in for the long haul already.