Having recently caught up with the first two chapters of Blinker by Rosie Packwood I jumped at the chance to ask her some questions about the series so far & what else she has planned.

What inspired you to create Blinker?

Initially there was a short dystopian story with the same characters called “Real” which explored ideas about what makes people, people. Can a robot or an alien be a person and what does that mean about humanity? What happens when we lose sight of that? It was pretty gritty and somewhere down the line it felt better for the characters to be in a space-opera setting rather than end-of-the-world scenario. It became lighter and gave much more room to explore the characters, and so Blinker was born!

Is Blinker a project you’ve had in the works for a while?

Yes! I’ve been making short comics with Merrik and Trixie for many years – it took a while to land them in this environment and with these other characters in the cast. Now they’re out there exploring the galaxies, I just hope everyone has fun being dragged along for the ride.

What can we expect in Chapter 3?

More cool aliens, more big explosions and more mystery about who and what Merrik and Trixie really are. Chapter 4 is in the works now too – it probably won’t be until 2021, but chapter 4 is going to bring a lot of danger. There’s going to be some big fallout after what happens at the end of chapter 3.

Do you have the whole series planned out?

Yes indeed! The plan at the moment is going to be 5 arcs with 5 chapters in each. Each arc will focus on new places in the galaxy, so there’s a lot out there that’s going to get explored. 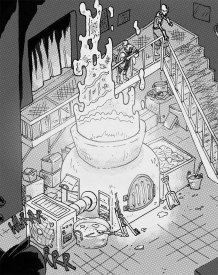 Are Merrik and Trixie based on anyone?

Merrik and Trixie are sort of my left brain and right brain – although it’s hard to say which is which! They totally balance each other out and one without the other can be a total disaster. Even though they might nag at each other when the going is rough, they also egg each other on in times of doubt.

What’s it like juggling every creative aspect of Blinker with writing, art, lettering etc?

Difficult!! It’s a challenge and I’m always learning, there’s huge chunks of the process to be improved or to find a faster way to achieve a good quality finish. It is valuable to learn to do it all first-hand and I’d still recommend it to anyone, because it means that I understand their efforts and what the little things I can do differently to help them are.

Do you think you’ll put out a hardcopy of the book?

Absolutely! I’m really keen to get it in print! Now there are three chapters it may be enough to print the kind of book I’d imagined (look and feel matters so much with a real life paper book!). It may be that for tidiness’ sake we’ll wait for the first five chapters to be done before we print. Either way, yes. Eventually! Agh!! 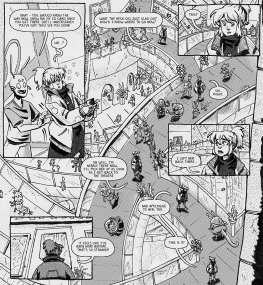 Right now Mike is in the process of sending me the draft scripts for the next issue of The Incredible Bun. And boy howdy is it a good-un!! He’s done a really fantastic job ramping up the story in this one. While Mike sorts out the ins and outs of the final script, I’m putting together a short story about cyberpunk rock climbers for a super secret anthology – – oh no! I’ve said too much already! They’re coming to get me!!! Gotta run now, byeeeee!!!!

Massive thanks to Rosie for taking the time to answer my rambling questions and for giving us a bit more of an insight into the plans for Blinker.

Head over to Rosie’s online store to get hold of Blinker & her other releases as well as Twitter to see what else she’s working on.  You can keep an eye on Madius Comics (website, Facebook, Twitter, Instagram) for her work their too.