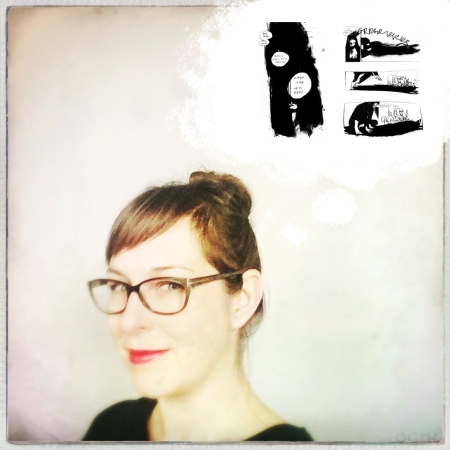 Having been lucky enough to get an early look at Lucy Sullivan’s debut graphic novel Barking recently, the trend continued with the chance to ask some burning questions I had about the book & the whole creative process behind it.

What was the main driving force behind creating your book?

Predominantly Barking was driven by a need to get a story and experience out of my head as honestly as possible and in doing so open up a discussion about the darker moments in life that affect everyone. But it was also driven by witnessing and consoling friends and students as they went through similarly difficult times and seeing them fall into the same or worse circumstances. That made me realise in spite of years passing, we still treat mental illness with fear and taboo and to be honest I’d had enough so I wanted to do something about it.

This seems to have been a labour of love, how does it feel now that the book is in print?

I feel Barking is more an exorcism than a labour of love. I needed to tell that story and it feels now like a space has been cleared in my mind and allowed room for other, more fantastical and frankly fun,ideas to grow. I’m proud of the effort and time I put into making Barking and hope that it stands well as my first graphic novel but I’m very much looking forward to moving on to newer projects now. 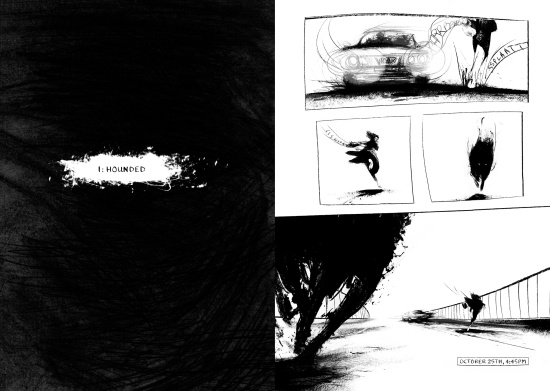 Did the book/story evolve as you created it?

In some ways, yes. Due to the crowdfunding aspect I did a number of talks and met many readers including people who have lived through and with mental health problems and a fair few expressed a need for a ‘happy ending’ or a lighter element. Barking was always going to be a dark and intense book and there are no happy endings or simple answers to why our minds break but I have tried to alleviate the story in parts and I think it’s a better story for it. I’ve been mulling it over as an idea for over a decade and it’s taken many forms in that time.

Mostly however, the basic structure is the story I had in mind from the start but the plotting changed throughout and as I swapped from writing to drawing and back again it would form more solidly on different aspects. I found the style for it in 2016 after many attempts and it’s mainly stuck to that but even then I found as I worked on each chapter my art would evolve and shift slightly. I always knew the opening and ending of Barking and that it would be told in 10 chapters but consciously allowed it to develop as much as possible when I worked on it full-time after funding was reached.

Being able to put your experiences into words & pictures seems to be the ideal way to approach a subject like this – was that how it felt as you worked on it?

Yes, it felt like the most natural fit. That was really thanks to Nick Abadzis and my partner Stephen Brown. Nick was part of my evening class group and suggested I suggested I try to make a comic after we’d discussed them in depth for so long. At the time I was struggling to create animated work as a freelance director and getting depressed by the work I was doing. When Stephen suggested that the comic could be based on my depression, as it was obstructing me from creating, it was like a bomb went off.

I’ve read comics my whole life from strips in my Dad’s papers to our bartenders passing me, probably entirely unsuitable, comics and discovering my own passions as a teen but never, not once, thought I could create one professionally. I’ve no idea why but I’m extremely glad that changed. I can’t imagine making stories any other way now, it’s a very satisfying experience creatively.

What was the most difficult part of putting the book together?

It’s been such a trail to get to this stage. Creating the book was pretty hard at times. I had two chapters made when I met Lizzie Kaye from Unbound with a third in development. I’d spent a lot of time playing with the formats and pagination so it was a slow progression. Then I had to focus on the crowdfunding for well over a year and had little time to spend on making the book. I applied for an Arts Council grant which took 3 months of writing and editing and then once I received that, and reached 100% funding, I had 6 chapters to make from pretty much bare bones in an intense period from March to July 2019.

I worked 12-14 hours day solidly, focusing on some very dark times in my life and even got Glandular Fever at one point. But it was the constant issues after I handed in my book that’s been the biggest challenge. Many of them are down to one relatively minor mistake along the line but it’s meant that I didn’t have a printed book for the launch at LICAF ’19 and then again at Thought Bubble. It was still missing for my ACE funded exhibition and the numerous events I was subsequently part of but that was all going to be made up for by finally launching at Gosh Comics on April 17th and then of course everything is where it is now.

I’m still launching on the 17th and currently planning a number of social media events throughout the day. It’s gutting to never have had the chance to celebrate all the work I put in but I’m hoping that when we all get through the current situation I can have a big old bash somewhere to share with the many people who’ve helped bring it to print and finally feel like it is complete as a project.

How was it working with Unbound to get the book published?

Going with Unbound was absolutely the right decision for Barking. I was really privileged to work with Lizzie Kaye as she not only has great experience and worked on a lot of Self Made Hero titles I was influenced by, but she also had an enormous empathy for the project and trusted me to make the book the way I needed to. The model Unbound uses where the author crowdfunds and they take care of the print fulfilment and distribution is a real challenge and not one taken lightly. The targets are much higher than a Kickstarter and it takes constant drive to create opportunities for pledges and a big effort not to get down hearted by it. The benefits though are equally higher.

Their distribution system is their own and is still going even with everything that’s happening now plus they get your book into not only comic shops but high street book stores too. Barking was written not only for comic fans but for non comics readers and it’s themes are universal so I needed it to reach as many readers as possible and Unbound are instrumental in that happening. Although it was hard I’m extremely grateful for the lessons I’ve learned and connections I’ve made through crowdfunding. It’s been a steep learning curve but emboldening as a creator. 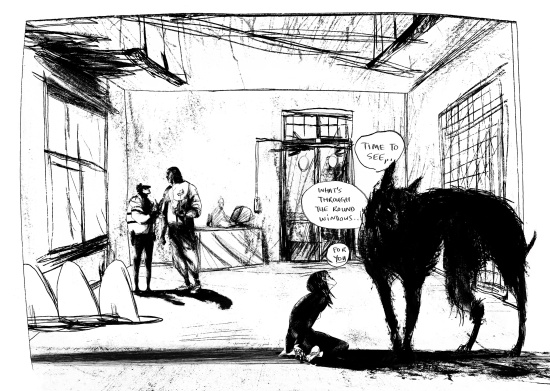 So far I’m not entirely sure! The Hardbacks have just started getting out to friends and backers and I’m beginning to get feedback. I’m really pleased by the reception so far and many people have connected with the story and felt their experiences echoed. I know some who have found it a very challenging read and I’m not sorry for that, there is not sugar coating in Barking.

My immediate family haven’t read it yet, apart from Stephen who lettered it and tried not to read to fully. It will be interesting to see what my mum and sister make of it as we were in our own battles back then but mum will have to wait as she’s in New Zealand on lockdown and they’ve closed the borders entirely. I guess ultimately as it’s my story I can only ever view it from my own experience so I’m looking forward to seeing what other people take from it , especially from the later chapters and ending… Time will tell!

Well lockdown had been utterly rubbish in terms of creating. I have a primary school age daughter so I’m mainly working on phonics, cursive writing and arithmetic. The latter not being at all my strength!When I do finally and hopefully get time soon I have a number of projects. First up is the artwork for IND-XED written by Fraser Campbell. It’s a wicked, tightly scripted lo-fi sci-fi from Fraser and I am itching to draw it and it’ll be launching on Kickstarter as soon as we can.

I’ve got a couple of smaller artwork stints lined up but not confirmed details yet and then the prequel to my next graphic novel The Bad Old Days. I want to kick it off with a short form comic I’ve already mapped out called Shelter. The whole story arc will be set in an alternative 60s-70s London and a mix of Crime Noir and Supernatural elements seen through the eyes of a female character in a world full of powerful women and mythological beings as she navigates a life of petty crime, world destroying gossip and coercive relationships. I’ve been writing notes on it for a while now and it’s going to be a lot of fun to make. I’m hoping to Kickstart it in the Autumn and have copies ready for Thought Bubble to launch there then maybe find a publisher for the full graphic novel. Here’s hoping!

A MASSIVE thank you to Lucy for taking the time out for an interview and for creating a book that’s already on my list of highlights for 2020….AWESOME book.  Barking‘s official launch is this Friday (17th April) and you can order a copy through the Unbound website as well as the Gosh Comics website & the Page 45 website.