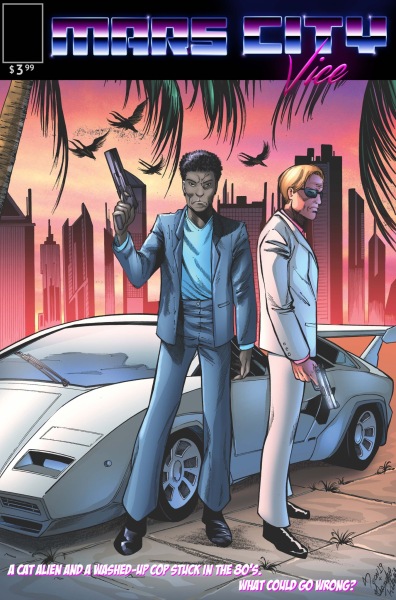 The first part of Mars City Vice is just about complete and with it being an 80’s themed story of undercover Detectives on Mars……I just HAD to find out more about it from one of it’s co-creators, Craig Sawyer.

What was the main inspiration in creating Mars City Vice?

I am a child of the 80’s. I grew up with some amazing TV and film, especially in the sci-fi and action genre. Movies like Total Recall, Blade Runner, the first alien, and Terminator were on the top of my list. On the TV side, we had A-Team, Battlestar Galactica, and of course Miami Vice. Not to mention, some really great cartoons. Mars City Vice is inspired by a lot of great 80’s film and TV.

How has it been working as a writing team for this series?

It’s been great, my partner in crime Chris Webb is like a best friend from high school that I never had. We met at a coffee shop in the Palisades, and we both had an instant creative connection over sci-fi, movies, and TV. He’s been working heavily in TV production for years. When I ran this idea of two cops working in a fake 80’s Miami on Mars, he was super excited. He actually lived in South Beach during the 80’s and was a huge Vice TV fan to begin with. We think just differently enough to challenge each other, and that really makes the stories work better. It is definitely an acquired skill working with a writing partner, but it’s fun to run ideas by one another, especially someone as creative and smart as Chris. 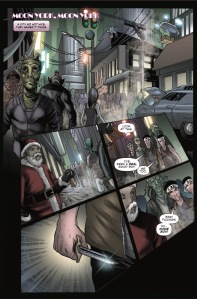 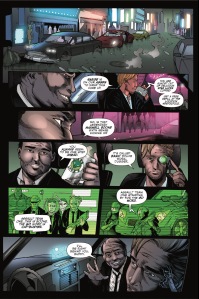 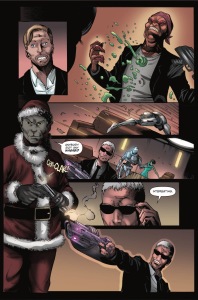 What can we expect from the two issue run?

Wow, we have a ton of crazy sci-fi action in store for you readers. Our lead characters, undercover cops Boone and Baths – an obvious play on Crockett and Tubbs from the Miami Vice TV show in the 80’s. Tykar Baths is a Chameleon-like cat alien, with a rare blood sought by the criminal underworld to make this illegal drug. Maxwell Boone is a disgraced undercover cop from Lunar P.D., both forced to take jobs as cop/actors in this fake 80’s Miami theme park on Mars. Baths is on the hunt for his missing sister, while Boone is obsessed with taking down this criminal kingpin named Hadrian. Hadrian will bring these two very different characters together.

The first arc is about these two starting to become friends and partners and introduce this universe. We had thought about releasing one issue at a time, but wanted to give ‘backers’ a little more bang for their buck by releasing two. So, we are doing a five arc series in two parts. The first two issues released together in part one. We were talking to a few larger publishers before the pandemic hit, but a lot of these companies have decided to put a hold on new projects, so we decided to do it ourselves. We may want to circle back to look for a company to distribute the full five issues as a trade, or even the single issues down the road when the covid clears.

How did the creative team get pulled together?

I covered pretty well how me and Chris Webb met, but now let me tell you about the book’s art team. I am blown away by the team on this book. I am also co-owner in a board game company called Sentient Cow Games. Our first game was a sci-fi, tabletop, dungeon crawl called Secret Unknown Stuff: Escape from Dulce. We used a lot of comic book artists on that game, so I had a fairly big list of talent to pull from, plus I had been writing comics for a while before that. Shout outs to our penciler Deivid Deon, inker Sandro Ribeiro, colorist James Brown, and Letterer Ed Dukeshire. These guys have worked for major publishers and I can’t go on enough about how professional they all are.

What’s it been like working on your first Comic Book release?

We live in a great time for indie creators! We have platforms, such as Indiegogo and Kickstarter, to find funding for our projects. This is the first time using Indiegogo, but I did use Kickstarter for my board game Escape from Dulce. It’s hard for your first campaign. You have to become an ‘out of the box’ thinking marketer, and not only a creative. I take people backing with their hard earned money very seriously. My advice to people running these social funding campaigns is – do your homework about what happens after you fund and need to fulfill too. This is just as important as getting your art and writing finished. 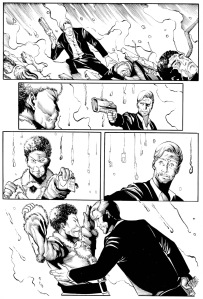 Did the story/world evolve as the project progressed?

The way I write is not having my entire plot in stone. I have to let the story go where it goes, there are a lot of surprises this way and that’s a good thing. Writing comics is a very different process for me, than say writing prose, or even film or TV. My style is very similar to Mark Millar’s (Hit Girl, Huck, Marvel’s Ultimates.) I learned a lot from studying how he does things, and also how Robert Kirkman (Walking Dead, Invincible) works the craft.

How they open a page, how many words to generally write in a speech balloon, how they trust  their artists. Story pacing. Crisp dialogue. They both know how to make the medium flow, and turn it on it’s head at the same time. And I’ve always loved what the writer Alan Moore said once. It went something like this, and I’m sure I’m not saying this right. “Writing is like casting a spell on the reader. On the first page the spell starts, and if you do it right, the spell will not break until the last page.” Something needs to happen at the end of every page that makes the reader have to turn the page. If you can do this, then people will keep coming back.

Do you have more MCV planned outside these first issues?

Chris Webb and I have a lot of story to tell about Boone and Baths and this world, so definitely we will be doing a five issue arc. After that, we will see how it goes. I like to write with a definitive beginning, middle and end, with characters learning and changing

I’m also working on a graphic novel series called ‘The Murk’ Eldritch Detective with the Argentinean Mike Mignola – Oscar Capristo. It’s Gangs of New York, Lovecraft, and Alice in Wonderland mixed together. We have been talking to some mainstream publishers. I am also about to do a 2nd printing on Kickstarter of my sci-fi board game Escape from Dulce hopefully in late May early June.

My partner in Mars City Vice, Chris Webb and I, we have some other projects in the works as well. Our mega goal would be to see Mars City Vice made into a live action television series.

A BIG thank you to Craig for taking the time out to talk about the new book & here’s hoping we see more of this soon.  You can check out what else he’s working over on Twitter and head over to the campaign through the link below to jump on-board at the beginning of the series: