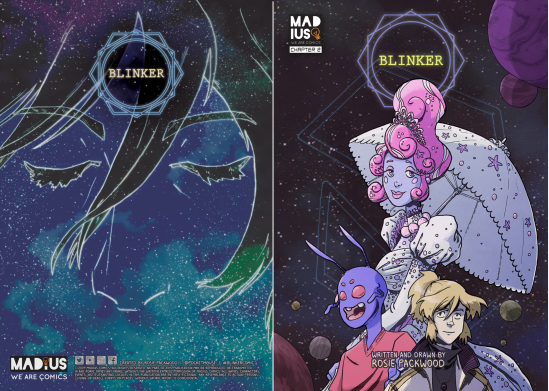 Having recently got myself the second chapter of Rosie Packwood’s Blinker it felt like a good time to revisit both parts and lose myself in her sci-fi adventure.

It tells the story of Merrik as he clambers to escape the clutches of aliens in a space prison far, far away and while we’re dropped right in the middle of his escape we’re easily swept up in everything that’s going on around him.  That pacing means we’re accepting of pretty much anything Rosie can throw at us and as his helpful and talkative AI assistant, Trixie brings some much needed knowledge to the attempt, the inner voice brings with it an unflinching sense of impending doom.  A slick tool to grab our attention.

The daring escape brings us into the “what happens next?” scenario as the hustle & bustle of Kardullah brings with it a new set of challenges….staying hidden, finding a job, getting food and not getting killed in the process.  The struggles he faces bring with it a new dynamic and a sense of frustration with Trixie but as the multiple voices vye to be heard in a city packed full of aliens that could help, hinder or eat him there’s a definite sense of things progressing in the second chapter.

Rosie shows off the versatility in her writing style exceptionally well in the space of just two short chapters and as the stealthy prison escape gives way to a galactic chase followed by the quest to survive in a city full of aliens, it’s clear that there’s a step up between the two parts of Blinker so far.  The frantic opener is full of nice touches between Merrik & his AI and while a city full of aliens brings with it a very different type of frantic, the pacing is high with the only thing that maybe holds the flow back a little being the sheer amount of dialogue, particularly in that second part.  That being said, it actually ends up suiting the contrast between the two settings so unlike other titles it gets away with the increase in text by a whisker.

Art-wise it almost feels like as Merrik finds his freedom so does the creator and the bleak canvass of a prison is kept stark before an explosion of ideas brings an evolution in what we’re seeing that grabs the attention.  The level of detail in the second chapter is amazing and it almost feels like the glimpse of potential from the opening part was a deliberate slow-burn so we could be slapped in the face with it as the story progresses.  You can actually see in the covers the development that’s happening and with it feeling like the momentum being built is kicking up the gears, it’s got an understated vibe that makes the flow of things feel very natural.

I’m glad I picked up that second chapter and after getting swept up in Rosie’s creation I can’t wait to see what’s next and how Merrik’s life changes with the AI voice in his head pestering him (in a good way) at every step.

Check out Rosie’s online store to get hold of this & her other releases as well as Twitter to see what else she’s working on.  You can keep an eye on Madius Comics (website, Facebook, Twitter, Instagram) as she’s part of the crew there too.