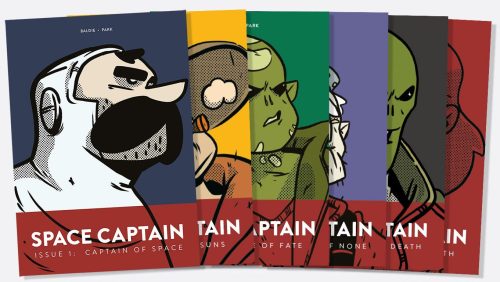 Space Captain from Chris Baldie & Michael Park has appeared on my highlights list before but 2019 saw the series reach its end……and what an end that was.

It’s a prime example of how a well constructed world can really pack a punch behind it’s central plot and as soon as adventure & mystery kicked off in the first issue, it was clear that this had a ton of potential.  With each issue bringing with it an extra layer as risks, humour, loss and a will to survive, poured across every page of the six issue run.  The difference here when compared to a lot of other releases, was just how easy it was to connect with the honesty & raw emotions on show.

The art style was cartoony but emotive and helped emphasise all those key moments with gusto that oozed style and an infectious sense of direction that made this a page-turning indie gem.  Every issue felt bigger than it’s actual page count and upon revisiting this a few times since it’s conclusion……it’s felt like the same sense of discovery builds up as you travel space on the shoulder of the Captain.  Chris & Michael have created a glorious book that takes its rightful place on my shelf and it’s filed in my head under ‘must recommend’ where it’s sure to stay.  Go get this if you haven’t already.