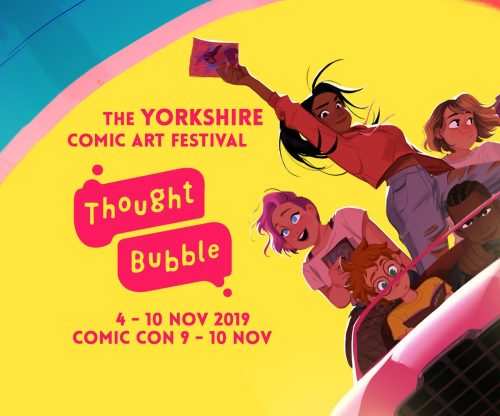 Monday saw the start of the Thought Bubble Comic Art Festival (TB or Tbubs to the regulars) and it’s week-long run of workshops, exhibits & screenings culminates in this weekend’s Comic Con……and the hype train had left the station months ago.

As with other years this event marks the end of the Comic Con season for 2019 for a number of creators & fans (including myself) and the challenge of going from strength to strength seems to have been something that this event and it’s organizers have been able to achieve with what looks like relative ease.  It’s reputation across the UK & beyond is a big part of that as it continues to put together an impressive guest-list from across the big name publishers but it’s always felt unique in its ability to embrace and champion the independent creators who write, draw, colour, letter & edit their way through all manner of indie titles throughout the year.

That combination & balance has been it’s biggest draw for me and as Comics Anonymous has evolved over the years as a one-man show, it’s always felt like an event I fit in with the most.  it addresses my love of mainstream comics with it’s guests & vendors while giving me a broader opportunity to get my hands on indie titles that have matched (and in many occasions surpassed) the issues released every new comic book day.

This year sees some significant changes to the event itself with it moving back to it’s November date and relocating from Leeds to Harrogate to be housed all under one roof in the Harrogate Convention Centre.  Having moved out of the Leeds Royal Armouries a few years ago into marquees in the City Centre this latest move feels like a chance to make the event truly self-contained and hopefully capture the same Con buzz in a single location.

With the likes of Brian Azzarello (Batman: The Damned), Donny Cates (Venom), Al Ewing (Immortal Hulk), Charlie Adlard (The Walking Dead), Dave Gibbons (Watchmen) to name but a few that are on the guest-list, there are so many impressive creators attending that it’s clear Thought Bubble still retains its mainstream status.  Intermingled with those guests are some amazing indie comic producers that are firmly on my “MUST VISIT” list – Afterlight Comics, Avery Hill Publishing, The Awesome Comics Podcast, BHP Comics, Blue Fox Comics, Comichaus, Improper Books, Madius Comics, Nobrow, Wine & Zine…plus a ton more.

You can check out the full list of Guests & Exhibitors below:

There are also some impressive books debuting at the event as well with some stand-out books that I know I’ll be getting, some glimpses of new projects and some hidden gems I’m sure to discover.