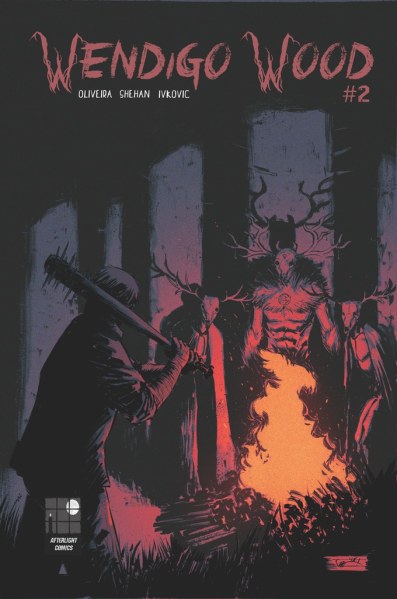 The first issue of Wendigo Wood from Afterlight Comics saw creator Joey Oliveira take subtle beginnings and then mess with our heads in the best possible way…..and a visit to round two was overdue.

While the opener gave us a glimpse of what was lurking in the woods it really stepped into gear when we see war-vet Hank Williamson working on the search for his missing daughter.  The new lead from the last issue saw him hit the road and here we see him get closer and closer to the source of that…….but quicker than you can say “don’t go near them woods” he’s hurtling into a tree at high speed.

The monsters in the gloomy forest close in on him and the mystery deepens when help from a figure in the fog sees him find a new ally that knows what’s going down and may just be able to help him on his mission.  The twists and turns are there that made the opener a bit more of a surprise than I was initially expecting and while there are a few sections that feel like they’re edging towards being a bit too word heavy, there’s no denying that Joey’s pacing & ability to build suspense is a powerful tool in his writing.

That smart script is coupled with the same straight-forward and solid art style from Vukasin Ivkovic that oozes the sinister edges that seem to be both there & hidden somehow.  That results in the shocks hitting with the punch they need to and the frantic feeling for Hank to escape his pursuers gets under your skin with an uncomfortable ease.  Shout out again to Chris Shehan for that suitably disturbing cover too.

A creative team that’s this slick manages to keep that old school horror vibe intact from cover to cover yet again and with another cliffhanger setting up the next issue, it’s a series that leaves my brain crying out for the next issue.  A success from Afterlight Comics and another of Joey’s books I’m committed to through until the end…..amazing stuff.

The third issue is being funded just now through the campaign link below – go check it out and get a copy of all three if you haven’t got them already: