The latest book from Rees Finlay sees him tackle his Autism diagnosis head-on and through a mix of comic & novel he’s aiming to give a glimpse into every step he’s taken to understand what that means and who he is……….perfect time for an interview.

The new book is a very personal project – what was that like compared to your other fictional titles?

On the one hand it’s extremely nerve wracking, and can understandably lead to feelings of vulnerability. Being so frank and open about so many factors of my life was an emotional and legal minefield. But on the flipside of that, it’s arguably a lot easier compared to writing fiction. With my fiction, its historically been a case of drawing from real life experiences and moulding it to a fantasy setting. So autobio stuff feels a lot easier, with the only challenge being filtering out the boring and irrelevant stuff to hopefully find the balance between funny and dramatic.

Did you approach this project any differently to your previous releases?

It was close to a complete reinvention of my process once I decided to make it a hybrid of a comic and novel. Historically I’ve done the standard, mostly linear, 3-act structure sort of stories. Whereas ‘Reaffirmation’ is more a collection of moments, with the comic strips typically being self contained sequences between the prose chapters. With the initial idea being the comics having the emotional core, and the written chapters being researched and more considered elements. But those lines do blur as the book goes on. Showing my research and learning curve as part of the personal journey, rather than a cold reporting of facts.

What were the main surprises or shocks when creating the book and finding out more about Autism?

The main discovery was the community and the impact social media has had on autistic people in the modern age. Its ability to bring people together in a positive way is exciting, but also seeing the damage it can do and the dangerous myths the internet can perpetuate is fascinating. The integration into this world has been just as valuable as all the books I read in preparation. 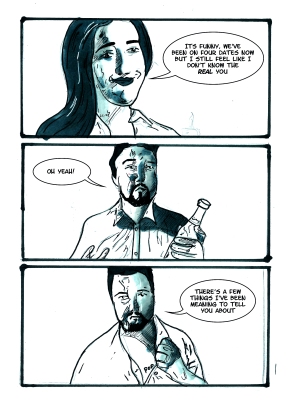 Has the creative process helped you deal with having the Autism diagnosis?

Yes, but not as much as I could’ve hoped. In a way it’s helped me understand why I see the world the way I do, the behaviors and thought processes. But it’s also opened my eyes to a harrowing history my autistic brothers and sisters have suffered throughout history. Which, as someone who’s condition means I’m painfully empathetic and it’s hard to not feel the dark and messy history of autism on my shoulders, and I did slip into a depression during the research phase.

How has it been juggling writing & art duties?

This is my first foray into writing anything that isn’t a comic script, so there was a great pressure to make sure it was the best it could be. Inspired by authors like Jon Ronson and Caitlin Moran, I strived to make my actual voice come through in the text. With all the tangents and perspectives that is synonymous with my condition shining through in a narration that hopefully lets my autism shine through.

The comic stuff came quite easily, having done many strange and funny antics I’ve got up to over the years being prime material for comic strips. And hopefully my intended humor is communicated correctly as I walk the fine tightrope of serious content that is peppered with comedy.

Do you think you’ll do another project that’s as personal after this one?

The book itself is primed for a sequel, maybe taking a more fighty tone as I take on the controversial charity ‘autism speaks’ and the torturous ‘ABA’ treatment autistics are forced into. The idea of neurodiversity seems the be fast bleeding into the cultural zeitgeist, with Greta Thunberg changing the world and the discussions about autism and our understanding it becoming more public. While there’s been countless books and media in the past. I feel we’re on the cusp of an explosion of neurodiverse content, and I’m hungry to be at the vanguard of such a movement with my book.

My only fear lies within the authoritarian attitudes around these things. As expressed within my writing, the idea of formatting personal experiences and preferences as a guide (especially in regards to a condition as diverse as autism) could be very dangerous. So I’d much rather continue sharing my story, encouraging others to do the same, and hopefully making some important forward steps in regards to public perception and equality.

What else are you working on now?

Lego City: Undercover on Xbox, I’m trying to get all the gold bricks!

But joking aside, I’m still doing trading card art for major film/tv franchises, but I’m currently putting all the energy into promoting the Kickstarter and making the book as successful as it possibly can do while also trying to take a bit of time out from the world to prevent burnout. Right now the plan is to do everything in my power to make the crowdfunder a hit, then if it is, 2020 will be taking the book on tour, I’d love the idea of hitting up comic-cons, talks, book-fairs and everything in between to spread word of my book.

Not that I’m saying I’m Jesus

That’s not for me to say.

BIG thank you to Rees for taking the time out to talk about his new book and you can keep track of progress with his creations & Lego City over on Twitter.

You can also help him reach that target and get this book into print through the capmaign link below:

Reaffirmation: Coming to Terms with an Autism Diagnosis Kickstarter