Rachael Smith’s titles seem to have made a regular appearance on my review & recommend list (check out I Am Fire, House Party, The Rabbit & Wired Up Wrong) so it made sense that I’d jump at the chance to read her latest release – Stand in Your Power.

After Wired Up Wrong helped deliver a one-two combination of telling a more personal story AND shining a light on mental health……this new book goes even further by taking a look at more of her own personal mechanisms for dealing with life’s ups & downs.  It’s all kicked off as she faces a break-up head-on but rather than gloss over the struggles it brings, it’s clear from the beginning that raw emotions and full honesty is the direction she’s taking us in.

I could tell you it’s a rollercoaster but that would massively simplifying the sheer efforts she has taken in the pages she’s produced for this one.  It covers hurt & pain, before exploring the darkest depths of depression and even further into self-harming but even in those depths there’s a strange sense of hope that lingers between pages.  The rich vein of humour that’s subtly dropped in throughout keeps it away from being a slog to get through but instead makes for compelling reading that feels instantly relatable.  I know I’ve experienced depression myself, like most people have, but while the openness from Rachael is definitely core to her story, there’s an extra level of connection with the reader with some of those shared experiences that makes this feel like a much more significant book than it seemed at first. 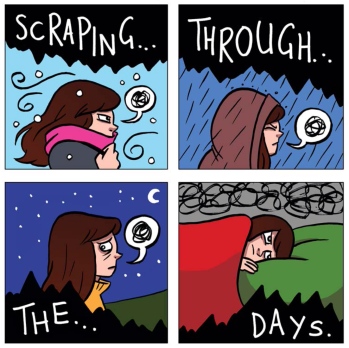 The art-work manages to capture the whole spectrum of emotions and as the tears of laughter and gut-punches of heartache roll out for us to experience with her…..there’s a strong sense that we’re charging towards a hopeful conclusion.  I’m refusing to give anything more away about the events in the book as it’s best to take time away from the hustle & bustle of life and escape into a comic about real-life that has a message to dwell on & contemplate.

This has ended up being probably one of the most honest books I’ve ever read and it’s ability to capture the raw pain of events that are outwith your control and then the struggle to find your feet afterwards, makes this a book that gifts us with far more than it’s page-count.  Emotional, funny & exceptional in ways that all caught me off-guard but it helps highlight just how good a writer, artist & creator Rachael is.

Head over to Rachael’s website for more on her titles and keep an eye on her Facebook & Twitter pages for news of what else she’s working on.  You can also get hold of this and her previous releases through her Etsy store and check out the project she has funding over on Unbound now too:

2 thoughts on “Stand in Your Power”