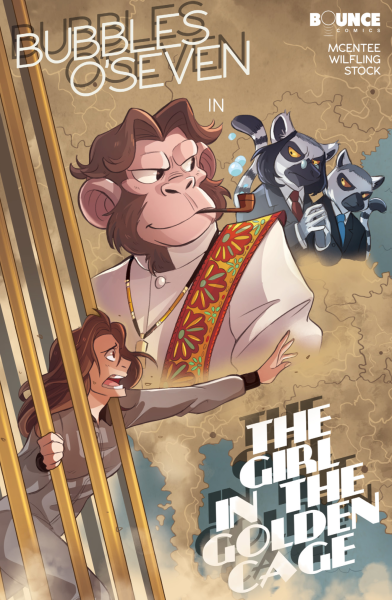 The previous four Bubbles O’Seven releases from Bounce Comics have already been a bit of a wild ride of ideas but then would you expect anything else from an anthropomorphic spy adventure???

Each issue so far has captured the essence of a particular Bond movie with this fifth outing being no different as it rolls out an impressive range of set-pieces & tongue-in-cheek gags that are as well-played out as ever.  The cast of humanized animals is added to further in this issue too as 511’s globe-trotting rescue plan sees him call in as many favours as he may need and the returning Mr Milton & Mr Keynes are up to their necks in a plot filled with rice & guns.

While 511 eases his way from location to location to reach his goal and save the day that bubbling plot in the background begins to drop in more of it’s secrets as the government he trusts has more to hide than it may have appeared at first.  Writer Grainne McEntee knows how to weave those ideas together and while some of the scene changes seem to come out of the blue there’s method in the madness in the context of the whole story.

511 has a much more troubled past to be discovered and those secrets seem to be outnumbered by those that the Government are keeping for him.  That extra element of double-cross keeps giving this a page-turning feel as you want to find out more but while you’re distracted by the main plot that subplot is the real hook for coming back for more.

Art on this one falls into the hands of Wilfling, who manages to keep the momentum rolling with some great detail and some slick layouts that helps balance out the different elements to the story.  Returning for another mission is Michael Stock who nails it on the lettering again having just as much to do as he has so far.  An extra nod goes to Giulia D’Orso for that cover and to Adam Jakes for the back cover too.

It’s another intriguing case for Agent 511 and as the changing artist suits the self-contained vibe of the mission in each issue…..it’s the consistency in the writing from Grainne that makes sure that each mission is worth coming back for.  The hints to that back-story are well-placed and infuriatingly good so there’s no doubt in my mind that I’ll be keeping an eye out for the next release.

You can catch up with all the latest Bounce Comics titles & news over on the website & Twitter pages and head over to the Comichaus website & app for the previous issues.