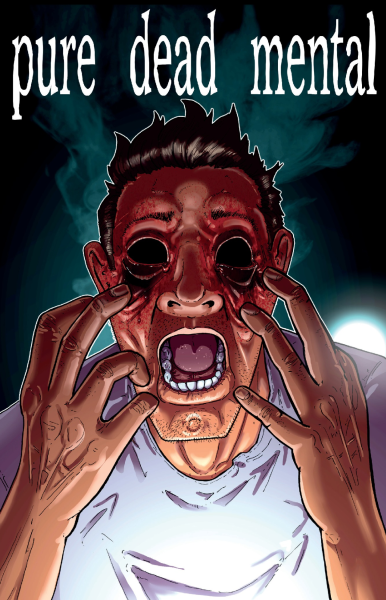 James McCulloch has been a source of some fairly dark stories so far but there’s no denying he’s produced some amazing small press books…..time for his latest release!

Pure Dead Mental is a collection of four stories that cover a range of raw darkness with revenge, zombies, brutal murder & serial killers taking their chance in the limelight and in the hands of James…….there are NO punches pulled.  It’s visceral, car crash events that unfold in front of us and while this is sure to shock & catch quite a few people off guard but there’s a subtle undercurrent behind the relentless vibe to each of the stories that draws you in.

The glimmer of heart or hint of understanding within each of the plots so the struggles and reasoning gives you something to connect with and keep on reading.  That’s a tactic James has taken before but with each of his releases he manages to increase that subtlety and punch you in the face with each of his ideas.

The Letter – art by Jonathan Scott, lettering by Rob Jones

Not Today – art by Rob, letter by Rob Jones

There’s a great team of artists involved as Adam, Jonathan, Norrie & Rob weave their own level of darkness into each of the stories to mess with your head just as much as they want to.  Given some of the sharp & brutal language on show Rob (Jones) and Norrie do a great job on lettering as they capture the varying themes in the dialogue & narration that keeps each journey flowing along nicely.

Another dark, brutal, but oddly engaging set of stories from James and with a solid creative team behind him it’s a 4-combo death move of a comic that manages to entertain amidst storytelling that’s been firmly let off the leash.  Nod to that amazing cover from Dan Butcher and kudos to Comichaus for

Head over to James’ website to check out this and his other titles or check out the Comichaus website or app.