The first issue of Andy W. Clift’s The Adventures of Captain Cosmic was a stunning pulp addition to the small press world and my collection so it was a dead-cert that I’d be sticking with it for any future issues……cue issue #2!!

While that first issue introduced us to father/daughter super team Captain Cosmic & Kid Cosmic and we find them heading for Devron VII after all communications have been apparently cut-off.  They arrive to find the inhabitants of the planet under the control of a strange plague of creatures and they have no idea where they came from.

Faster than you can say “Watch out for the Blob!”, Kid Cosmic is drawn into the mystery and in need of saving from the same fate that’s befallen everyone else on the planet.  The details behind the plague and the enemy behind it sees Captain Cosmic having to face a familiar foe that’s returned to haunt him. 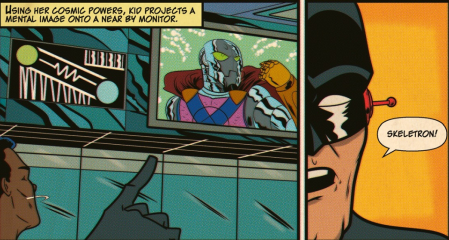 Andy has labelled this his “passion project” and it shows in every inch of the two issues so far.  The difference here is that he’s able to really slide the adventure into fifth gear with a glorious story that oozes all the Silver Age style and fizzing dialogue to keep the opening momentum going.  Sure it might be corny in places but there’s something instantly heartwarming about the glow the pages seem to have and having the paper itself printed as though it’s an aged comic is an impressive touch that adds to the authenticity of the story.  Love it!

You can check out more of Andy’s work on his website, Facebook & Twitter pages.  You can get hold of Captain Cosmic on the online store or through Comichaus and you can catch-up on both issues on the Comichaus App too.

1 thought on “The Adventures of Captain Cosmic #2”