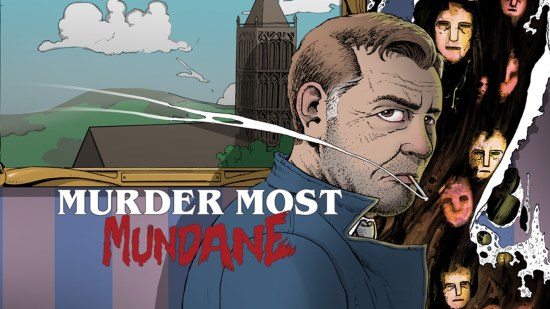 Murder Most Mundane from Mad Robot Comics became a reality through Kickstarter at the end of 2017 and earlier this year the book arrived with it’s backers…..including me.

It tells the story of murders in a small village and it’s comparison with the likes of Hot Fuzz were uncanny but writer Matt Hardy & artist Ash Deadman created a story that had a messed-up head of its own.  A grizzled Detective, a cult-like group of locals and more gruesome murders than you can shake a stick at played out across some of the most detailed art I think I’ve seen in the indie world.  The most surprising thing about this was that Matt had already set the bar particularly high with his Cadavers series but this was a new direction for him to take and the mix of thriller, absurd situations and gruesome murders made sure this was as far away from mundane as you could possibly get.  This further confirmed that Mad Robot Comics could deliver different types of story that hit a consistent level of quality and that means I’m looking forward to their next release even more.  Gloriously gruesome stuff.

You can check out all the Mad Robot Comics titles over on their website and keep tabs on what else they are working on over on their Facebook & Twitter pages.