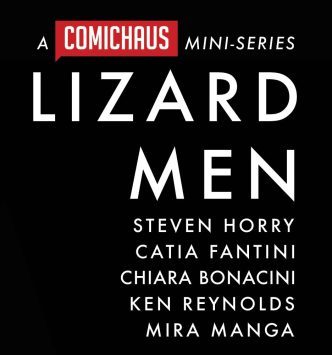 Lizard Men was launched under the Comichaus banner and with a sea of support through Kickstarter but the 6-issue series has managed to back that up with one of the most surprising & entertaining comics I’ve had on my reading list this year…..

The four issues released so far, tell a story of the UK in political turmoil as Rock-star and newly elected Prime Minister Dylan Zamani takes the reins of a country that’s just about flipped upside down with the wave of excitement & disbelief in what’s happening around them.  Add to that the shadowy figures in white suits that are pulling strings to make sure things go their way and the blend of real & surreal becomes instantly engaging.

The creative A-Team that’s been put together for it is made-up of writer Steve Horry, artist Catia Fantini, colourist Chiara Bonacini, letterer Ken Reynolds & editor Mira Manga – and I’m pretty sure that they have all escaped from a comic book prison to weave a wild story.  A tale that has been trucking along packed with action, laughs & violence where everyday events have a pinch of the macabre that gives every panel the ability to surprise.  It’s that very ability to surprise and keep me guessing that’s helped elevate this in a world of already impressive indie titles and with the story & visuals seemingly coming from another league……it’s an easy title to point out for being both a highlight for myself and a suggested read I’d mention to others.

The recent reveal of the cover for issue #5 is testament to just how much of a surprise package this has been and continues to be: 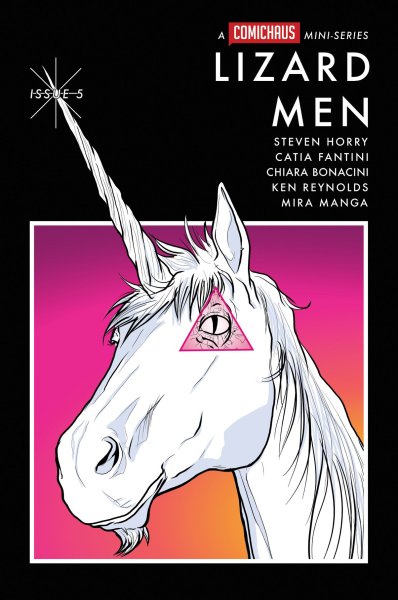 Keep up to date with what’s next for Lizard Men over on the titles own Facebook page and the Comichaus Facebook / Twitter pages.  Check out the Comichaus website & app for the issues so far as well as the rest when they are available.