Lyndon White is a creator/artist that’s impressed on every project he’s been involved with and his latest solo project hit the campaign trail through Unbound just last month……so it was time to fire some questions his way.

What Candles is all about:

Generation after generation people are taught one thing, never use magic. The evil Witch has cast a plague known as Dark-bark over the land and one by one, infected villagers are lured into the enchanted forest never to be seen again. As a last resort to save her family, Grace embarks on a quest to steal the Witch’s magic and use it to save her dying village.

Meanwhile, Idris, a flamboyant sorcerer and his talented apprentice Ava, are outcasted from their town and begin to track the source of the Dark-bark. Wolves howl at the night sky and candles begin to glow. The Witch must be stopped at all costs, however, everything is not as it seems.

What was the inspiration for Candles?

Candles was directly inspired by my love of traditional Brothers Grimm Fairytales and Studio Ghibli Films. Which at a glance can be seen as a jarring combination. Both have a fantastical element to them but are tonally different. If you re-read the Grimm stories they are incredibly dark in places, a lot of people have rose-tinted glasses towards a lot of the classics, Rapunzel, Cinderella, Little Red Riding Hood etc. This is partly due to growing up with the Disney versions. On the other hand, Studio Ghibli films are serious in places but generally more light-hearted. They tackle heavy themes in a fantastical setting (with the exception of Grave of Fireflies, which I love for other reasons). I didn’t start out trying to mash these two influencers together. They are just things I enjoy, I have the books and films in my home. 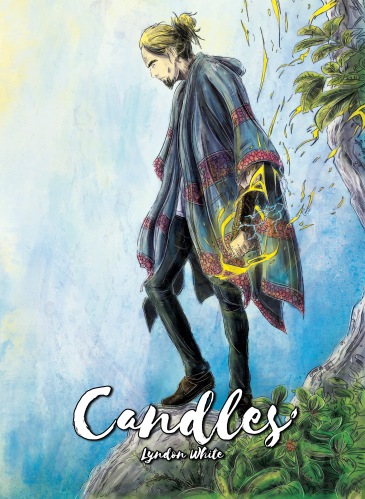 The idea for Candles came from moving house. In the distance in my new place, there are trees on the hillside and at a glance, floating lights appear at night. They look incredible and a little eerie when I first saw them. Not knowing what they were, I visualized them as floating candles and the core idea for the book was born. This was developed and started to questions why candles would be floating in a forest? Who would they belong too? Why would this person want to do this? All of which, you find out in the book. The very boring version to what was causing the lights in the forest, was from a house in the distance. When the leaves fell in Winter I could see beyond the trees and find a large house in the distance. The house lights in the evening were emitting light and I was only seeing little pockets through the tree branches.

Is this a project you’ve had in mind for a while?

Yes and no. I had the idea for this book roughly a year ago (October-ish, 2017). I’d just started to pitch another project, something that had a finished script, art samples, synopsis, etc. Everything you’d need and expect from a pitch. Sadly, it didn’t find a home. However, while I was pitching, I developed Candles and got it into the same stage as the previous pitch. I started pitching early 2018 and thankfully, it found a home with Unbound. I have been wanting to get back to doing something completely my own, from a writing and art perspective. Not that I haven’t enjoyed working with different creators and other projects, I simply enjoy telling my own stories and really like the ideas behind the work. The idea for Candles came along at the right time. It’s tonally lighter than what I’ve been working on and that can give you a bit of fresh air. A pallet cleanser.

Have you always wanted to do a fantasy story?

I’ve actually partly already done one in the form of A Tale of Shadows, which sadly didn’t get finished for one reason or another. I did enjoy working with Tyler and Paul on those books. However, aside from Shadows, yes. I love fantasy and magic stories, but when done well. I think I’ve got a good take on it, that will surprise people. Both from a story and art perspective.

Story wise, it is using some familiar elements that readers will be used too, but I’m twisting it. In terms of artwork, you will actually get to see how magic is used and the impact it has when someone casts a spell. It’s a force and takes control to be used correctly. Hopefully when people read the pages they will see there’s a lot of movement in the artwork when someone throws a fireball. I’ve seen a lot of magic in illustrations and comics that often falls flat. They spend more time with characters talking about how magical and fantastical their world is, but don’t actually show it. Good storytelling is “show not tell.” I’m going to show how to draw magic in comics, hopefully. I know these are famous last words but I’m putting a lot into this book. 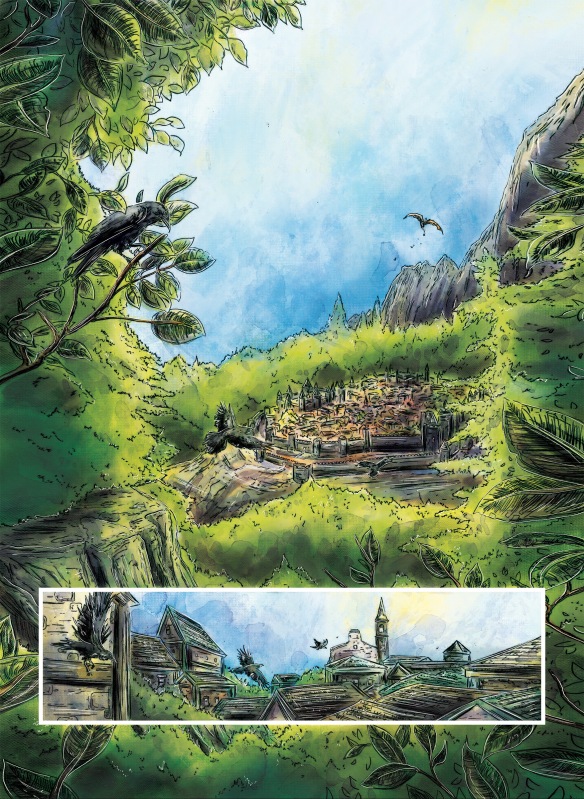 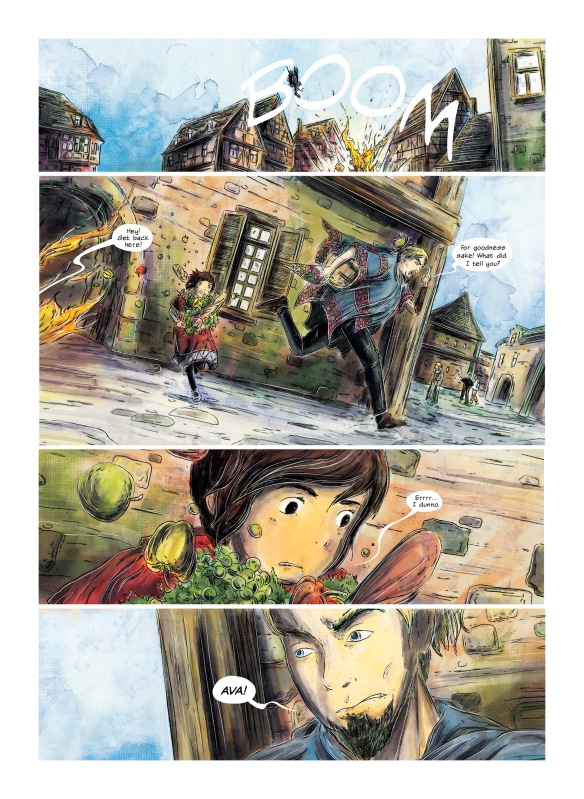 What’s it like getting back into a solo project?

Short answer, its incredible. I know doing both the artwork and the story isn’t for everyone but I love it. I think my ideas are good and I’ve got a strong understanding of storytelling at this point. Which is because I’ve managed to work with so many different creators over the past few years and learn from them. Everyone has their own style. I’d be happy and excited about any project I’m working on, but with Candles, it’s up a few more steps. I’m incredibly excited about this one. I think the graphic novel, self-contained format is well suited for this story.

Has it been easy going back to juggling writing & art duties?

It’s not been too bad. As I’ve said, I have been writing while everything else has been going on. I’m quite strict with myself and don’t start drawing anything until the script is finished. That way I can solely focus on the story, get it locked down and tighten it up before I start complicating it with visuals and character designs. I treat them as two different hats. One for writing, one for art. I needed help when I started the outline and script to make sure it was working. I was trying to go for a lighter tone and sometimes you need an outside eye to check your on the right path. Simon Birks & Jordan Sam Adams both helped early on and read bits and pieces that I sent over. The core idea was already there. Sometimes you just need a fresh pair of eyes on it.

What can we expect from the final book?

The best thing I’ve done to date! I know I sound like a salesman when I say it and I don’t want to come across arrogant. I really don’t, but I have been working my arse off on this book. The artwork and storytelling have levelled up. When looking at this book compared to previous work you should (in theory) see that I’ve tried to push everything further.

From cover to cover, Candles will take you on an epic fantasy adventure. Following a hero’s journey with monsters, magic and all the heart ache that comes with it. There are a number of surprises for readers, I’m being very careful what I showcase and put online because I don’t want to spoil a couple of plot lines. For those who like my work in horror, there are sprinkles of horror here and there. As I’ve said in the pitch video, its light and humorous, yet a little dark and twisted in places. There’s also a number of action scenes throughout the book, including the opening which involves a pack of plague infested wolves and their leader (a giant wolf) attacking the village. No page is wasted and you hit the ground running when reading this one. Once you’ve finished reading the opening scene, you should be locked in for the ride. 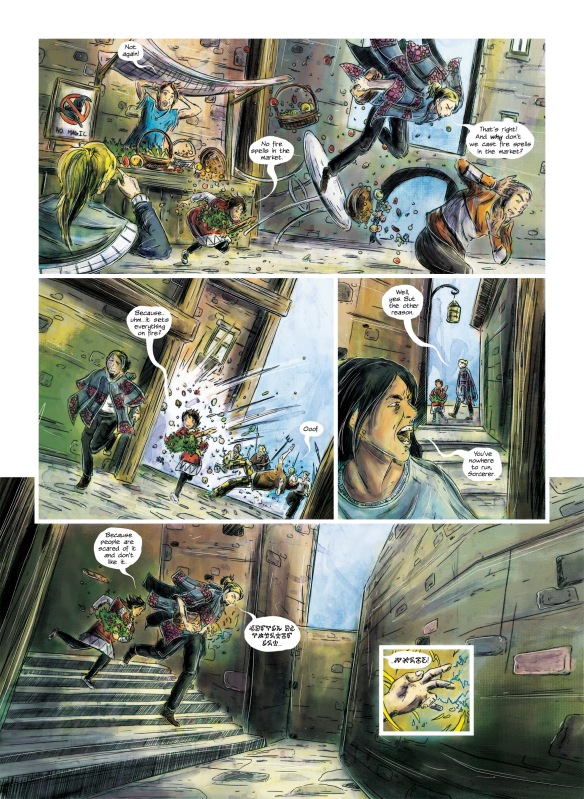 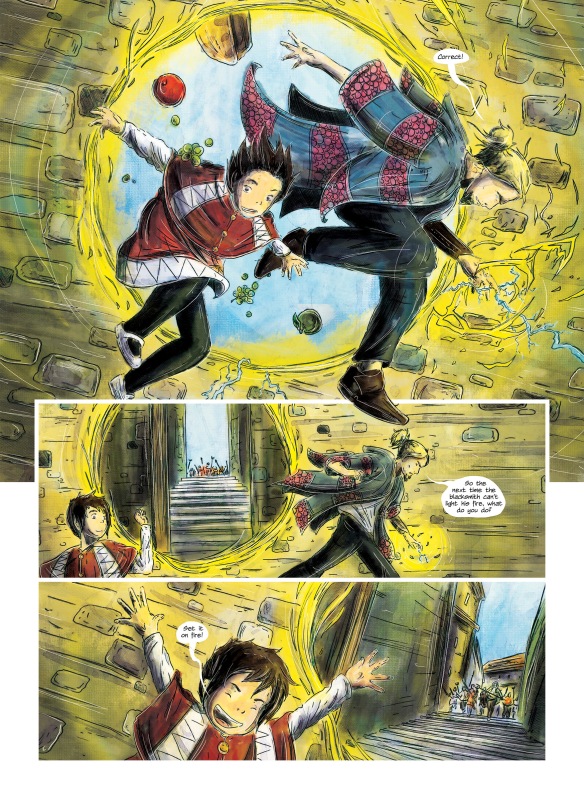 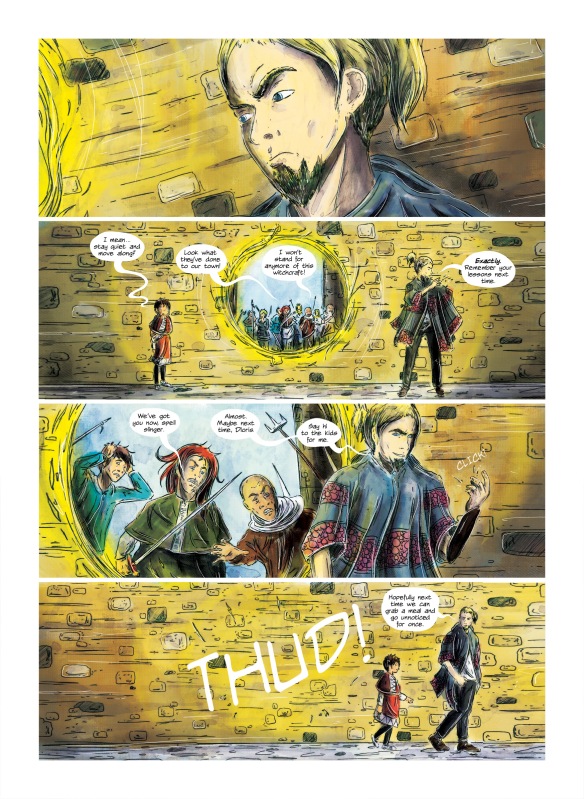 What drew you to Unbound as a route to getting this title published?

Again, I’ve been pitching and Candles landed a home with Unbound. I’ve been looking at their portfolio for a while, as they are fairly new to graphic novels, but have been around for about 8 years or so. I’m no stranger to crowdfunding and I liked how the book is funded by people supporting you while you make it. Comics take a long time to make, so having that support and interaction with your readership while you make it really helps. Especially when doing every aspect of the book, it can be quite isolating. The key things that appealed to me with Unbound were having Lizzie Kaye as my editor, who is incredible. She is really supportive, knows her stuff and takes on projects she believes in.

Another big thing was distribution and production value. All of Unbound’s graphic novels are Hardback, with high print quality. This is really important to me because I’ve seen what my artwork looks like when people skimp on printing costs, it doesn’t look great. Especially with all the paint, textures and details. It needs that love when it comes to printing. Distribution is a big deal because it means they can get it into Waterstones, book shops, comic shops etc. The back-end stuff which I can do on a small-scale, but nothing like a full-sized publisher. Unbound handling distribution means I can focus on making the book, promoting it while its crowdfunded and then let them take over and do all the things a good publisher should do. They can also get the book overseas and to markets that I simply don’t have easy access too.

What else are you working on now?

My main project at the moment is Candles but I am starting to prep working on a Lovecraft based comic. The script is finished and I’ve just done the first round of character designs. We aren’t too far off from me starting to thumbnail and sketch out pages, which is pretty exciting! I’m a big Lovecraft fan and getting to adapt a version of one of his stories in comic form is something that’s on my bucket list. It’s still early days but people should see something about it next year. Aside from that I’m doing bits and pieces of Blue Fox Comics. I’ve done the artwork for Everything Must Go, one of the stories for Hexes Volume Two. I’ve just finished the lettering for Robyn #2, which I imagine will come to Kickstarter pretty quickly.

There’s other things in the works, just nothing worth talking about just yet. I have recently finished my run on the Mandy the Monster Hunter: Legend of the Spindly Man series with Hellbound Media. Mandy #4 will be out early next year and bring the story arc to its conclusion. There’s plenty to come out while I work on these longer form projects. To anyone interested in Candles, please check out the Unbound page and pledge / pre-order the book if you can. Unbound is more of a slow burn form of crowdfunding over the course of a couple of months. So please show support where you can. Doing all the likes, shares, hearts, tweets, blogs, vlogs, story posts, afternoon tea with your mum, newsletters, screaming and shouting really helps. Especially with these long form campaigns.

Check out what’s on offer from Lyndon’s latest release on the link below:

1 thought on “G-Man talks to Lyndon White about Candles”