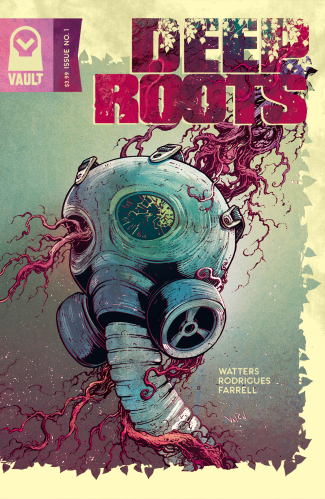 The latest release from Dan Watters sees the light of day thanks to Vault Comics and after loving his Limbo book, Deep Roots was one I could get on-board with easily.

This opening issue introduces us to a tale of two worlds that sees the real world we recognise blur with a savage other world where the roots from the ground become  entangled with everything from myths & legend to bank robbery.  The solitary figure that seems to be on a mission in the other world has a definite purpose behind him and some detailed narrative gives us a glimpse of what’s gone on in the past for him. 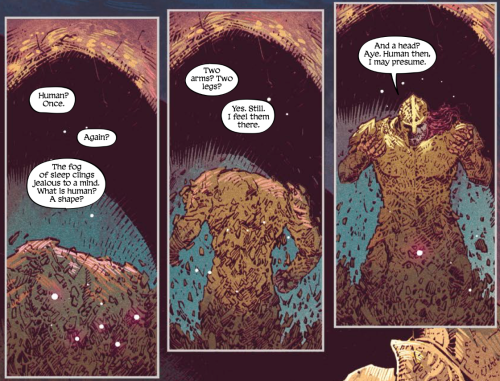 Flipping into the real world we see the Government are well aware of the strange goings-on and are working their way through the bizarre events to find some clarity in just why this is all beginning to take hold.  Dan’s multi-layered story has an intricate feeling from the very first page and while that may scare off some potential readers there is much more to be gained from a comic with this level of detail.  It evolves as it progresses and the flip between something like Gladiator to something like The X-Files manages to work far better than I would have expected. 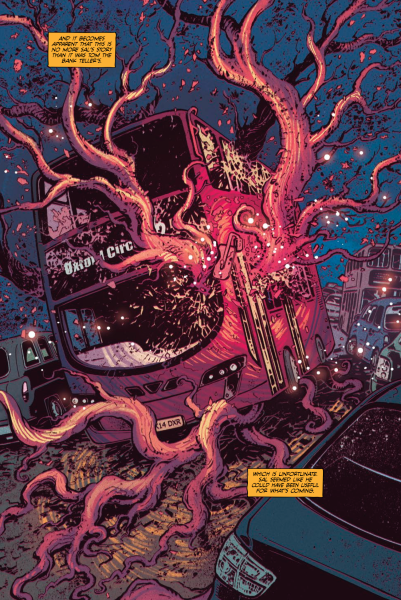 The visuals take things to another level though as Val Rodrigues works her magic to bring some sort of sense to both worlds existing in the same plot and the vibrant colours from Triona Farrell adds another definite split between the look & feel of both worlds.  This helps make that multi-layered plot more feasible and the mix of layouts help bring the idea of scale & absurdness to life.  Kudos to Aditya Bidikar on lettering too as there’s A LOT of narrative & dialogue to contend with in among this twin-world story.

In the end, the complexities of Deep Roots are quickly cast aside as the quality from the creative team begins to reveal the story behind it.  Intricate and detailed throughout, it quickly becomes worth the effort to switch off and throw yourself into another release that’s going to be worth sticking with for the long haul.

Find our more about Deep Roots and the other titles from Vault Comics over on their website and keep up-to-date with more news from them over on the Facebook & Twitter pages.