After getting an early look at The Edge Off this week I then caught up with writer/creator Fraser Campbell to talk about all the weird sh!t we can expect 😀

Has The Edge Off been a book you’ve wanted to do for a while?

It’s been in the pipeline for a few years. I think I started writing it at the tail end of 2015 but for various reasons Iain and I haven’t been able to get it working the way we wanted until recently. That’s mainly due to it being a bit experimental. Iain had this idea for the comic to be a combination of his style and mine and that took some time to evolve into something we both felt worked as a story and reflected what we wanted to do. Some of the other attempts got as far as a few pages in before we had a rethink. But I think the book has benefited from all of that. I think we had to do that groundwork to get the book we now have which we’re both really happy with.

There’s some definite David Lynch vibes to the book in both story and look – was that intentional?

Absolutely. I think for Iain in particular Twin Peaks: The Return really set fire to his mind and I noticed he was really energised and drawing again much more after that. Lynch has served as a huge inspiration to both of us but for Iain he’s been a touchstone for many years, not just with his films and television but also with his art and general approach to creating. I think when it comes to our stuff, I’m kind of the Mark Frost, giving Iain a framework to play around in. That’s a bit of a generalisation but you know what I mean. I think one of the things we both like about Twin Peaks is that there’s multiple ways to read it and it means different things to different people. That’s certainly something we intended and tried to make sure was present in The Edge Off. 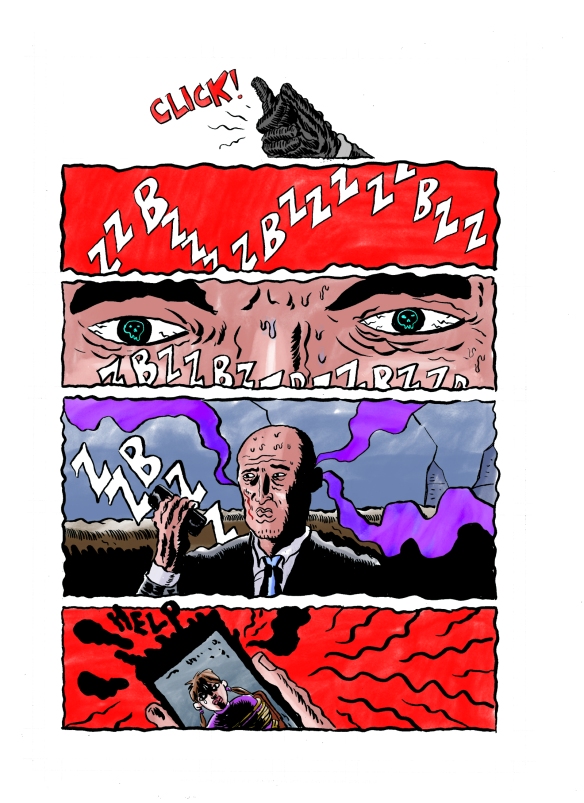 You mentioned on your website a number of influences but did this make the process easier or harder when finalizing the script?

Not harder certainly, I don’t think there was any agenda to fit anything in particular in. It’s all there in our creative DNA really. Iain and I are similar ages and grew up watching and reading a lot of the same stuff so things like The Singing Detective, Performance, Twin Peaks, The Long Good Friday and Statham action movies were always going to be baked in once we’d established what it was we were trying to do.

We both come at making comics from quite different directions though so for me, the creative energy and a lot of the enjoyment of doing the book was blending our individual takes on these influences. It’s worked out as something that you could describe as a 50/50 blend but probably more accurately is just something different. Something neither of us could have done on our own.

The visuals have that typical Laurie nightmarish vibe but what were the main influences for it?

Twin Peaks: The Return, Lynch’s work in general, Francis Bacon, Daniel Clowes, Jason Statham movies, 70s/80s British gangster movies – they’re all in there feeding the style. But I think Iain’s “nightmarish vibe” comes a lot from just him really. He’s got this ability to channel and visualise existential horror, that almost inaudible hum of unease that plays inside all of us. He has that ability to turn it up so we can’t block it out anymore. I think that’s why so many people respond to his art. It might look abstract, but we get it. We recognise ourselves in it.

What were the main influences for the visuals in The Edge Off?

I think in terms of the way Iain approaches art now Jeff Lemire’s work on Royal City has been a huge influence. I think Iain has become more interested recently with the storytelling and getting the art down a little faster and that’s made his work more free and enjoyable for him. Which is great, because that’s unleashed a lot of creative energy and he’s back being as prolific as ever now. 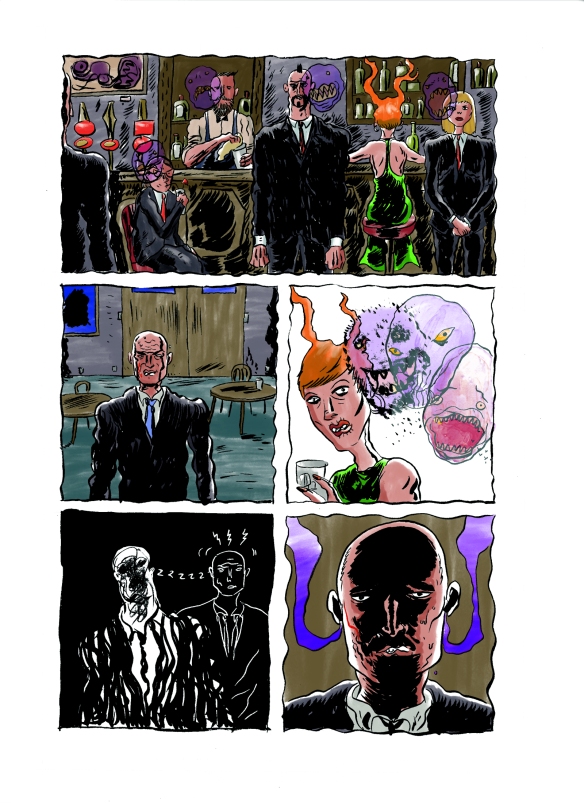 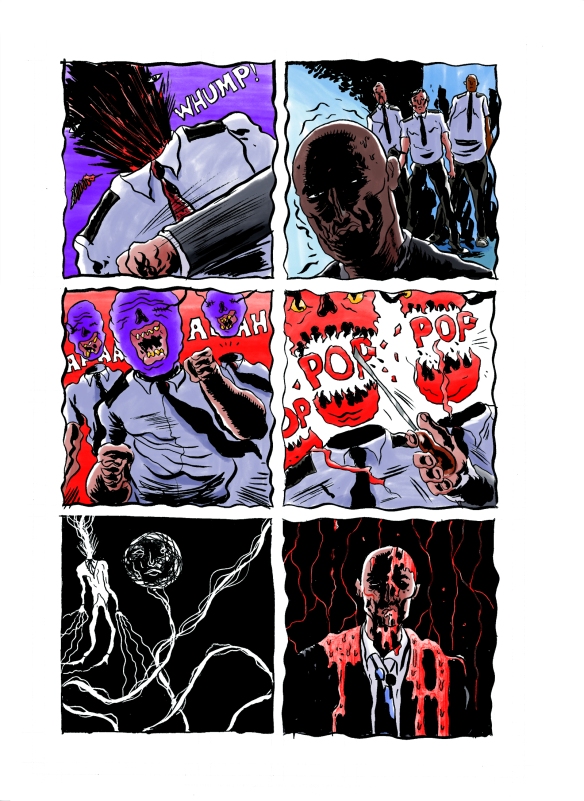 What can we expect in the Kickstarter campaign?

We’re trying to keep this one fairly simple, but you’ll be able to get the comic of course in digital and print form. Plus there will be a small selection of commission slots from Iain available. As well as that we’ll have a selection of original pages from the comic available for sale. There will also be some surprises and we have some fun ideas for stretch goals should we be lucky enough to go above target.

Can we expect more stories featuring Lee and the Butler mob family?

Much like Sleeping Dogs, this is a one shot so I doubt we’ll revisit these characters again.

Could this be the launch of a new series of one-shots in a Campbell/Laurie nightmare universe?

We have a lot more very big ideas, so yes that’s a strong possibility.

What else are you both working on just now?

Iain is working on commissions right now and I think may have something in the pipeline with John Lees. We’re also trying to put together a kind of pastoral horror anthology with some friends so there’s that too.

As for me, Alex Automatic #3 is in progress and I’m really excited about this one. After the first couple of issues that introduced the character and the world he inhabits, this is where we really start to delve in and start looking at who Alex really is and who he was before we met him in the first issue. James is beavering away on that right now so we should hopefully have it ready for Thought Bubble in September. I’ve also been working on a new action/adventure comic called Heart of Steal with Irish artist Katie Fleming that we’ll be pitching around publishers shortly. Plus there’s a few other things I’m just about to start getting into gear. So watch this space as always

BIG thanks to Fraser for taking the time to talk with me and with just a couple of days until the Kickstarter launches get over to the titles Facebook page to jump on-board as soon as it’s live.