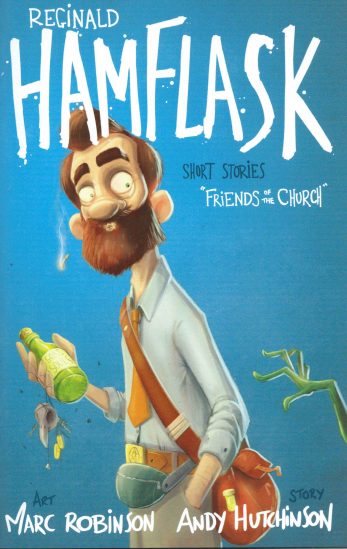 Writer Andy Hutchinson & artist Marc Robinson team up to bring us the first issue of their comic Hamflask and that cover alone is enough of an indication of how good this could be.

It follows Reginald Hamflash – your average man-with-a-van who is on his latest road trip north….although it soon becomes clear that he’s on travelling on business rather than pleasure.  He’s soon arriving at a church just as the latest sermon is finishing up so he gets to work on the task at hand by calling in the help of the vicar to capture the imp that’s in his sights……as you do.

From here on out it’s a high paced mix of sight gags & one-liners with a crazy blend of Hot Fuzz meets The X-Files and it’s down to the conviction Raymond has in his actions that we’re swept up in his organised madness.  Andy’s writing and tight grip on what’s funny and how to convey that across the panels helps us get involved with the story with very little explanation and with Marc’s art firmly in-sync with that idea the deadpan delivery and slapstick shenanigans just work.  They combine to make this all look very easy.

In the end it feels like a far more established book than I was expecting and the British feel to it gives it a very comforting edge from that very first page.  I hope that there is more on the way from them both either on this title or on something else and they’ve shown here that they can produce a great story that can be read & re-read easily.  Brilliant stuff!

Head over to the Hamflask tumblr page to catch-up on more of the title and check out the creator pages below: