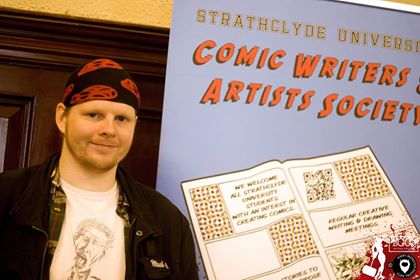 George Bell is an all-round comic creator who has done a bit of everything and from his early Flakes series he’s moved on to contribute in the Anthologies produced by the Comic Writers & Artists Society that he founded.

What was the first title you worked on?

Before university I had an ongoing webcomic called Flakes which I hosted on my website, it was a short cartoon strip about sentient snow people, demons, giant crab armies and other such nonsense.

How has your work changed since then?

I founded the Comic Writers & Artists Society in my first year at uni and we initially submitted short comic strips in the student newspaper. Last year I successfully applied for funding to put together a comic anthology with longer form stories written and drawn by our members. This was my first opportunity to edit other people’s work as well as contribute artwork myself for another person’s script. This year’s anthology was a bigger editing challenge with more submissions and I got to learn a lot of new techniques while making my cover painting for it.

Who are your main influences?

Our society members come from various backgrounds but local talent has inspired me greatly, including John Wagner, Alan Grant and Cam Kennedy.

What comics are you reading just now?

I’m currently working my way through Hellblazer from the beginning and I try to keep up to date with the X-Files comics among a few others.

The money! *laughs depressingly*; actually it’s just a uniquely accessible format for telling stories. I like reading them and it’s super easy to start doing yourself, you can see a lot of progression over the course of only a few projects.

What are you working on just now?

I will be handing over the reins of the comic society to a new president over the summer and pulling some of my other projects out of folders so hopefully I’ll have a new comic book in progress soon. I will probably remain a member of the society so I’d like to contribute to next year’s anthology as well.

You can check out more of George’s work over on his Surreality Comics website & Facebook page – I recommend you check out Flakes 😉  You can also check out what’s happening with the Comic Writers & Artists Society over on their Facebook page too.