Cosmic from Panels Comics sees writer Erin Keepers & artist Letty Wilson drop us into a unique story of Rinette as she takes an alien visit head-on…..literally.

The resulting collision leaves the two-life forms merged into a hybrid that certainly looks like Rinette but has a much more otherworldly personae deep down.  Waking up in a crater that marks her first steps in a strange body in a strange world it becomes instantly noticeable that we’re fully invested from the beginning.  It’s a journey of discovery and it reminded me of Starman a bit at first but the exploration of a new world and the levels of awe in the facial expressions of our female protagonist left me lost in the same world.

As she finds her feet in the new world she’s hoping to call home, she begins to yearn for more information on what else the planet has to offer and she’s soon on her travels to explore.  Meeting friends along the way she experiences the kindness of strangers and finds shelter & comfort in her new world as well as her own alien/dragon companion that only she seems able to see.  It’s raw inventiveness from Erin with her story here as she weaves a magical trail for central character and reader alike and while she introduces a dark cloud of some government attention into the mix it’s very difficult not to be swept up in this. 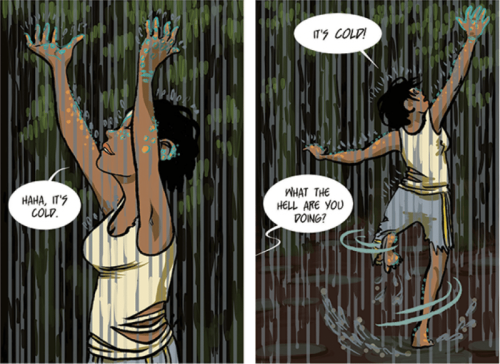 Art-wise the pages almost glow with the same boundless energy of the story and it all ends up like a blurred mix of Scott Pilgrim meets The Day the Earth Stood Still (the 1951 original obviously) but with a dragon companion.  The colours add an extra dimension too as the almost dream-like state Rinetter drifts into from time to time sees alien beings from an alien world somehow become familiar.  It’s two issues of non-stop wonder from the creative team and with the news that there’s a third issue already out I’m hoping to get my hands on it and the other titles they have on offer as soon as I can.

You can pick-up these first two issues over on Comixology now and check out more on Cosmic and the other titles from Panels Comics over on their website & in their Sellfy store.  You can also keep up to date with what’s next from them over on Facebook & Twitter too.