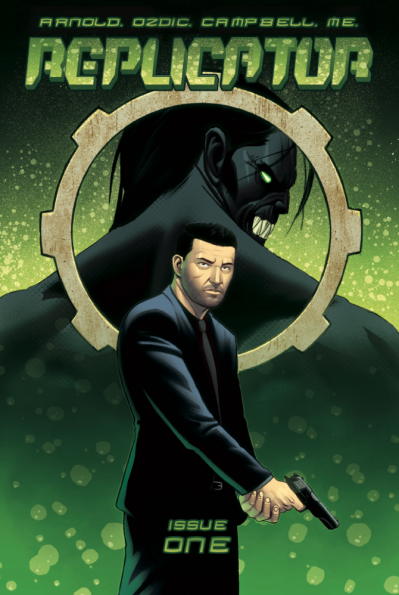 Opening with a quick prologue catch-up we find out that this UK-based comic sets the scene in a world ravaged by a disease known as the Red Death.  While this sets the world up to almost crumble around its own infrastructure the fallout sees martial law declared and a new high-tech solution to keeping the peace.

We’re then thrust into the aftermath of these events as the non-infected are separated into their own walled bubble that keeps them safe from the infected who are condemned to their fate.  Cue the arrival of central character Ryker as he holds the line between the innocent victims and the faceless military as he tries to keep the safe haven known as ‘The Sanctuary’ from being tainted by the outside world.  There’s more to the plot than that for Ryker though as his own perfect bubble of a life on the inside of that wall becomes a nightmare when him and his wife become targets themselves.

It’s a topsy-turvy world that’s been created here but rather than giving in to some tired cliches the story feels far fresher than you might expect.  There’s real pearl in every risky element and the relentless military presence rules with an iron fist to keep the false ideals of safety fresh.  The art from Armin Ozdic and colours from Ross A Campbell give this an even split between the two realities where the grim scramble for survival faced by those outside the wall and the idyllic life of those inside have a clear line between them which is captured exceptionally well to show the hand that each side has been dealt.  Similarly, Jamie Me’s lettering keeps the action punchy and gives the heavier sections of narrative a good flow so as not to disrupt the story.

Grim in places as it needs to be and edge of your seat elsewhere, this first issue is the type of debut that shows the potential of both its creative team and the title itself and with it all ending on a cliffhanger it sets things up so that you are desperate to know when we’ll see more.