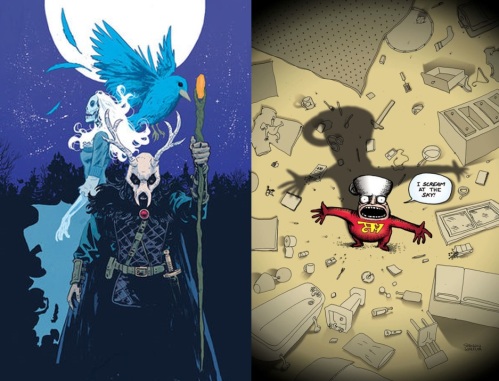 Introducing Lode from the planet Savant, having gone walkabout around the universe, she chooses to chronicle the lives of the dying. As a result seeks out war zones. She is not a harbinger of death; but it is death nevertheless that draws her like a moth to a flame.

Her travels bring her to Hubris, a planet ripped apart by war. There, she is recruited by local government forces to help hunt down a war criminal. It is a journey that will take her to the mouth of madness. The End of Days itself.

Writer Jim Alexander (Metal Hurlant Chronicles), artist Will Pickering (Burke and Hare) and colourist Fin Cramb (Mono) are all Scottish, but it was at the 2012 Kapow comic convention in London where they came together for the first time. Jim Campbell (Scottish name, English by birth) was brought in as letterer and the team was complete.

The comic was launched at Plan B in Glasgow on October 2013. In no time at all, Savant garnered some notable small-press reviews. Big Comic Page said, ‘Yes, it’s a small-press comic, but this is a title that would more than hold its own – excel, even – in any line-up of comic books from any publisher in the world.’ Geek Pride said, ‘I haven’t felt this gripped by a sci-fi story since the first time I read William Gibson.’

Dark Horse publisher Mike Richardson got in touch in 2014 to express an interest in acquiring the strip as a creator-owned series for his company’s flagship book. A six-part series was agreed, 48 pages in total, adapting the first 24 as appeared in the Planet Jimbot book, plus 24 all-new pages to finish the story.

The series is scheduled for Dark Horse Presents #32-37, March thru August 2017. The creative team is hopeful of more stories in the future, but for now looking forward to see Savant in print courtesy of a world-class publisher in Dark Horse Comics.

Issues 32 (March) and 33 (April) of Dark Horse Presents are already solicited but in the meantime, Planet Jimbot is still going strong with award-nominated Wolf Country.  Written by Jim Alexander, art by Will Pickering, with covers by Luke Cooper, issue 7 is due out soon.

You can also check out Planet Jimbot’s online store for all their titles as well as latest news over on Twitter.  Jim will also be attending Megacon in Carlisle on the 25th February.