Neil Gibson has already brought us the likes of Twisted Dark, Tortured Life & many more titles under the TPub banner but Theatrics sees him take the plunge into webcomics…..which in turn will see print thanks to Kickstarter.

He’s joined by illustrator Leonardo Gonzalez, colourist Jan Wijngaard, and letterer Jim Campbell to bring us the story of Rudy Burns, a Broadway actor at the height of his fame in 1920’s New York.  A night of celebrating sees him stumble out from a local speakeasy and into a street fight that triggers a downward spiral of epic proportions. 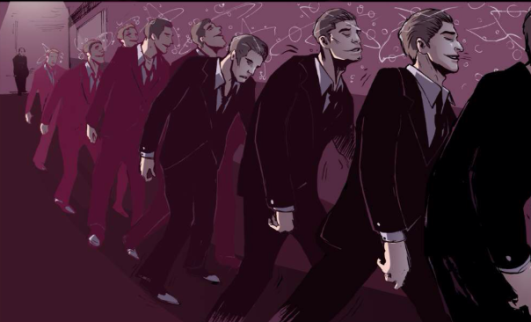 He finds himself out of the spotlight of fame during his recovery but the damage done both physically and to his reputation, is life-changing.  His world crumbles in an instant and Mr Popularity is soon trying to scrounge himself any job that’s going…..and even that doesn’t work out.  Thankfully his friend Sam is on-hand to offer a crutch to prop him up and a head full of ideas to get him back into the acting game but in a much less obvious way than you might expect.

Crammed full of that 1920’s atmosphere, Neil has managed to harness the prohibition era sights & sounds with an impressive art team blending the bright lights and crushing lows of Rudy’s New York world.  It all ends up being a rollercoaster of ups and downs and while I’ve only read through the first four chapters it’s enough to see that this could well be some of Neil’s best work.  It’s a unique blend of of highly-charged action that see Rudy rise from the ashes of his former life and while it’s an unconventional route for the central character to take it somehow fits exactly what’s needed.

It’s got a Boardwalk Empire vibe to it initially with some of the 20’s Gangster elements but it doesn’t dwell on that aspect for very long before running with Sam’s idea on how to get Rudy back on top.  Stunningly beautiful artwork is what takes this to another level and it’s got an impressive hue to it which makes it almost glows with the same type of colours you’d expect from old photo’s or old film from the same period.  That all adds a degree of authenticity to the story on offer and the whole world just screams out “READ ME!!”  TPub just took it up a notch…..and all with the guiding hand of Neil Gibson!

You can catchup on the webcomic and you still have time to get hold of the complete collection in print through Neil’s Kickstarter campaign at this link.  You can also keep up to date with all of TPub’s titles on the website, Facebook & Twitter pages.