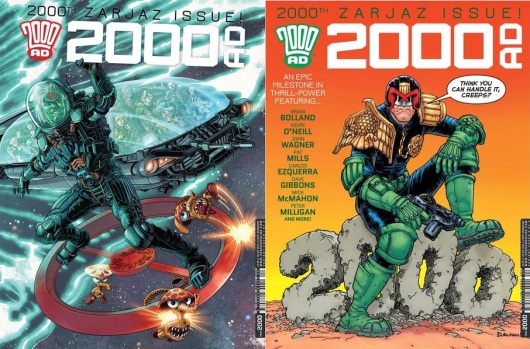 Today may well be a typical Wednesday with pull-lists filling up with the latest comic releases but among those releases we see 2000AD hit it’s milestone Prog 2000.

Whether you’re a regular reader or not there’s a fair chance that the comics you read week after week have been influenced in some way by a phenomenon like 2000AD.  It may have spawned a household name like Judge Dredd but the other creations and the writers, the artists, the colourists, the letterers that have graced the pages have gone on to contribute to creations across pretty much all the other major comic book publishers.

2000AD’s official release is below:

The comic that twisted hundreds of thousands of British childhoods, 2000 AD celebrates its landmark 2,000th issue on Wednesday 28 September with a special celebration issue.

A huge British success story, it is no exaggeration to say that the cult anthology comic remade geek culture in its own image – launching the careers of some of the industry’s most famous talents and proving instrumental in shaping contemporary comics and ‘geek’ culture, as well as going on to influence Marvel and DC’s multi-billion dollar movie franchises.

Producing innovative and provocative comics for 40 years, 2000 AD is Britain’s biggest comics export – as well as two movies based on its biggest character, Judge Dredd, the lawman of the future has entered the international lexicon as a term for authoritarian policing.

2000 AD has also had a huge influence on both British and American culture – with a high profile generation of creative talents citing it as a direct influence, from filmmakers Edgar Wright and Chris Nolan, musicians such as Scott Ian of Anthrax, and Booker Prize nominees and bestselling novelists such as David Mitchell.

Generations of the comic’s creators – such as Alan Moore, Grant Morrison, and Mark Millar, to Brian Bolland, Jock, and Dave Gibbons – have gone on to establish themselves amongst the leading voices of the superhero genre for both Marvel and DC, from the 1980s right into the present, influencing directly the current wave of Hollywood movies. There are also innumerable comedians, director, writers, musicians, politicians, and personalities who are former or current readers of 2000 AD.

2000 AD Prog 2000 will be available from newsagents and comic book stores, as well as digitally from 2000 AD’s webshop and apps for Apple, Android, and Windows 10. Published in print and digital every Wednesday, 2000 AD is the Galaxy’s Greatest Comic and remains at the industry’s cutting edge. 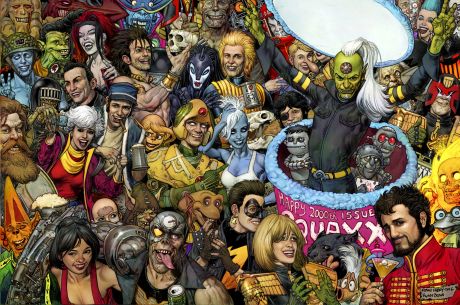 Added to the glory of hitting Prog 2000 is the announcement of a 40th Anniversary event in February 2017 with tickets going on sale in just a few weeks…….let the clamber for them begin!!  Click the image below to get through to the official event page. 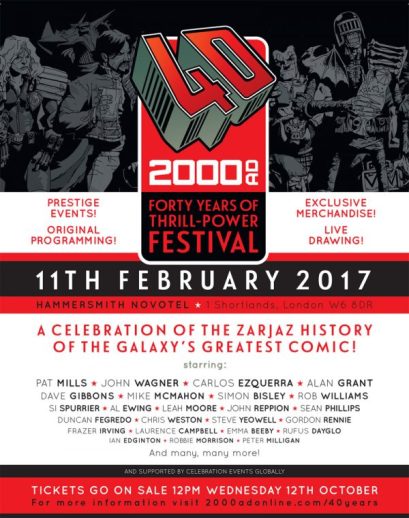 2000AD’s rich history was covered in the documentary FutureShock a couple of years ago and it’s only when you delve deeper into the title beyond the pages that you realize the trial & tribulations that the team involved with producing it have had to face……which makes reaching Prog 2000 an even bigger achievement.

I’ll be picking up my copy of 2000AD as soon as I can and I’m sure I’ll get a review up but I’m mainly going to take the time to soak in the stories, the art and I’m sure I won’t be alone in approaching this release a little differently than the usual weekly offerings.