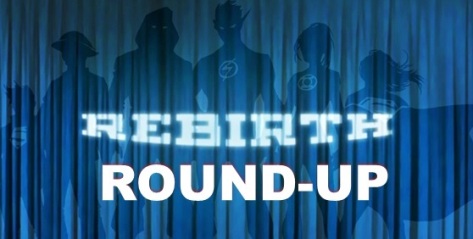 After another gap last week with continuing Rebirth stories – we got a new series starting this week that I’ve been waiting on since it was announced….

I’ve been a big fan of Francis Manapul since his New 52 run on The Flash and when I heard that he was writing/drawing the new Trinity title for DC’s Rebirth it made all kinds of sense for it to appear on my pull list……thankfully I wasn’t disappointed.  In fact, after just one issue it seems to embody the whole purpose of Rebirth itself.  It’s taking a new DCU with familiar characters and breathing life into them like never before and while Manapul’s art seems to be able to do that to anything he draws he’s growing as a writer with every book he does.  The setup is in-line with most of what we’ve read so far with a clear purpose of putting the band back to gether and having Batman, Wonder Woman & Superman come together in a book that manages to be separate from their solo titles and any JLA involvement and build something with heart & depth to it.  The new Trinity have problems to overcome but building it on a foundation of friendship & understanding is what’s key to the success & longevity of this trio.  Distrust fades away between them fairly quickly and even though it’s a new version of Clark it’s still a Superman that’s willing to do the right thing albeit it with a bit more persuasion than his predecessor.  The three pieces of the team fit together perfectly and the pages from Manapul have the layouts and glowing pages of art that capture the early stages of new friendships and the awe and wonder of the power they all possess.  Art duties may well be transitioning to Clay Mann from issue #3 but with a strong start like this…..the only way is up from here as it’s already a contender for one of the best titles to come out of Rebirth…..fingers crossed that remains the case.