There are a select few books in the small press/indie world that stay with me after reading them because of how entertaining they are and most of those are as far away from superhero comics as you can get…….Gavin Boyle’s Escape from Coatbridge is exactly that.

After a more than impressive opening issue I was keen to see the next issues as soon as they came out and had been keeping an eye out for the second in this three-parter but I was lucky enough to get my hands on an early preview pdf.  The race was on to get the daily grind of work out of the way so I could sit down and soak in Gav’s latest outing for Tommy Vango. 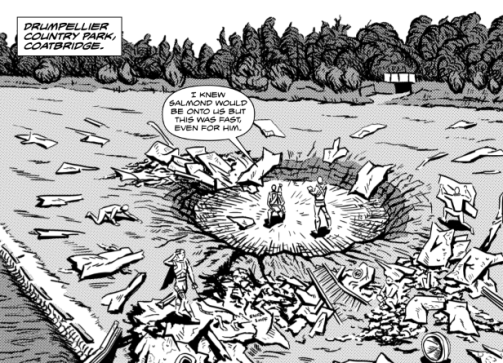 The aftermath of that first issue is still playing out as Tommy’s quest to recover those pesky Trident missiles from the hands of the worst elements from Coatbridge.  What’s different this issue though is the roster of characters as more are starting to appear thick and fast but thankfully Gavin manages these particularly well and gives them all a well-balanced introduction.  There’s a few twists and turns along the way as he drops in some revelations about some of the connections to Tommy and all while injection the same level of humour into the world he’s created which all combines to achieve the same momentum and vibe from the first issue.

The Glasgow banter from Gavin mingles well with his plot on this second issue and while it may limit the audience to the Glasgow area I’m sure that there’s more than enough reason for this to be picked up and enjoyed further afield too.  A good story is a good story after all.  His artwork remains a strong point as he keeps the sense of scale and level of detail required under strict controls.  The main success of the book lies with the fact that it’s Gavin doing both story and art and those two elements bend to each others will as needed through the issue and I’d expect that if someone else was working on art then it would lose something along the way.

Where the first issue introduced the concept with a unique style, this second issue adds flesh to the bones with it’s growing roster of characters and additional depth to the plot but it’s the vein of humour that’s the driving force behind the whole thing and I couldn’t help but laugh my way through this.  It’s a glorious setup for the third and final issue and while the second issue will only officially be released at MCM Scotland this weekend…..I already want the next one.  Well played Gav……well played!

You can get hold of Escape From Coatbridge at this weekends MCM Scotland (24th & 25th Sep) and through the Rapid Comics website.