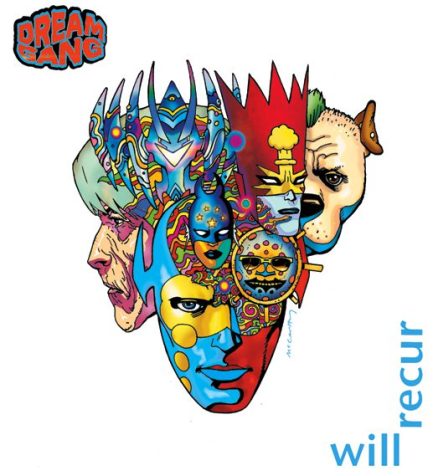 After recently catching up with the newly collected Dream Gang from Dark Horse Comics I got the chance to speak with it’s creator Brendan McCarthy and fire some questions his way………..onward to the psychedelic answers!!!

What was the inspiration for Dream Gang?

As a young fellow, after I left art college I went on an expedition to the Himalayan foothills more than 30 years ago, and stayed in the ‘floating village’ of Srinagar in northern India. I was on a ‘Razor’s Edge’ type of Dr Strange quest to unlock the Mysteries of the East…I had a strong interest in the secrets of the Vedanta. Must have been the rarified air or the exotic locale, but my dreams were very vivid for those weeks… I literally ‘dreamt’ the story and core concepts of what was then titled ‘The V-Agents’ during one night and have been mulling over their possibilities for about 30 years since. Sometimes I’d forget about it all for years and then I’d go back to the story with a new piece to add.

When I was a kid, I grasped the bizarre concepts being expressed in Dr Who like the dimensions of the Tardis. That was a real mind-fuck but I remember it to this day, it was such a striking paradox. I like to use concepts that have that resonance into the story, so they stay with you after you’ve put down the book. That’s what I liked about ‘Hitch-Hiker’s Guide to the Galaxy’, the joking with high-speculation physics, etc. The free use of unbounded imagination is something I’d like to see more of in comics.

Do you have a favourite character from your Dream Gang creations?

Seeing as we create everything that we see and experience in our dreams, then all the characters we meet are projections of ourselves and our memories. So I don’t necessarily have a favourite character, as they’re all components in the bigger dance of the story.

There’s a serious element weaved into the story with Patrick’s childhood flashbacks that helps keep it grounded – was that intentional?

I think the phantasmagorical surrealism of the early part of the story in the more ‘Yellow Submarine’ style of the art, sets up the deep emotional/psychological sequences later on in the story — and the more austere art style. And yes, that was intentional. To really experience the impact of what happened to the boys, I felt it needed to come suddenly — as most shock does — and hit you as hard as possible. From out of nowhere. The bits of the comic process that really intrigue me are the actual core experience of reading and looking at a comic, the places I take you to as the creator of the experience. Making it all ‘work’ and come together for the reader is the hardest thing to pull off, in my view.

The collected edition looks and reads great – did you make any tweaks to it from it’s original release in DHP??

Yes, I remastered pretty much every page and have included 20 pages of really good quality sketches and previous character versions that give a good idea of the amount of work that went into nailing down the story. It think the finished book looks like a really nice addition to the psychedelic canon.

Do you have more Dream Gang stories planned?

I have some ideas for some new stories. Dream Gang is a very open concept and allows for lots of possibilities. It depends on how much the book sells in the end. I’d quite like to collaborate with other writers and artists on more Dream Gang stories.
I find actually drawing comics these days crucifyingly arduous. The art has always been difficult for me, I always wished I had more natural talent. It has to be bludgeoned out of me, with slow, endless redrawing and erasing.

With some of your other work on TV\/Film would you like to see Dream Gang get a conversion?

It would make a splendid live action story, for that Dr Who/Star Trek type of viewing demographic –or even a cg animated TV series — I’ve done a few of them before, like ReBoot. Best wait and see what happens down the road.

I’m in the middle of a DOCTOR FATE story for DC Comics. It’s writer Paul Levitz’s final story for his Dr Fate run and he wanted a psychedelic fireworks show to go out on — and here I am, working with 2000AD’s Mark Harrison to bring something bright and breezy to these final two issues,17 and 18.

Dr Fate is an interesting character who just never ‘clicks’ with a readership. If the Doctor Strange movie goes over well and finds an audience, it could lead to some new thought on Dr Fate. I like the character a lot , but he suffers from being a bit boring compared to Dr Strange’s own back story.  I’ve had a good think about Dr Fate while I’ve been drawing the new strip and have some new ideas on where to take the character next.
I’ve also been posting on twitter some art gems from my archives, like an outtake sequence from my Dr Strange/Spider-Man ‘Fever’ book which I didn’t have the page space for. 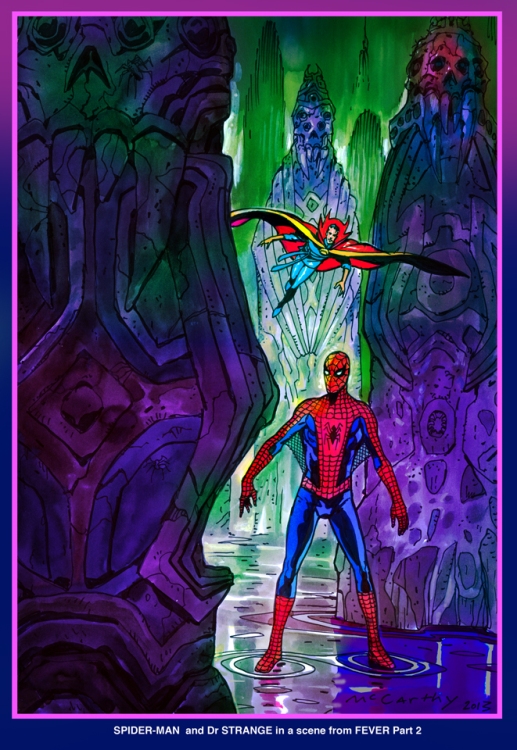 You can see more of Brendan’s art on his website and over on Twitter (@MysticMcCarthy).  Go check out the Dark Horse Comics Website for more on Dream Gang too.