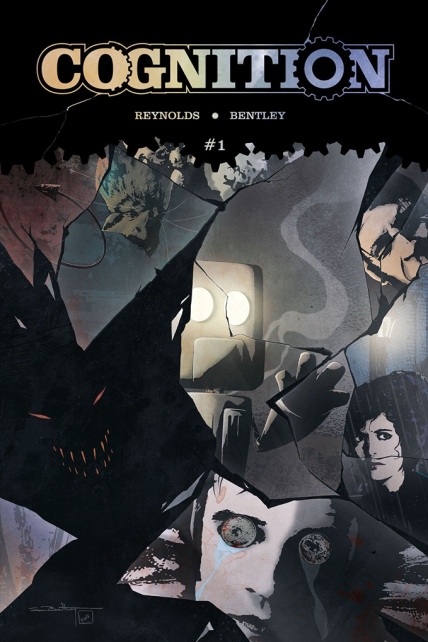 Cognition #0 already impressed earlier this year after a strong Kickstarter campaign but writer Ken Reynolds & artist Sam Bentley outdid themselves with an even stronger Kickstarter for issue #1.

While issue #0 set the stage and introduced the characters in the world Ken was creating it’s this latest issue that sees Cal & Sigma from the British Occult Secret Service (B.O.S.S.) really get to grips with their latest supernatural case.  It’s not plain sailing for the robot & mouse duo though as their appearance alone gets them all kinds of grief but there’s no denying the experience they both have at tackling all things weird. 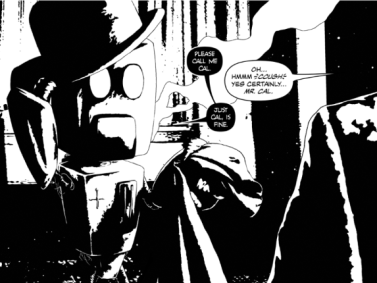 This latest case sees them arriving at the Pindergist household to investigate a series of deaths that have ripped the Pindergist family apart.  Their normal everyday life has been deeply influenced by a troublemaking demon and the B.O.S.S. methods are exactly what is called for.  This first issue is a single, self-contained story and it’s an extremely enjoyable read and while that issue #0 helped set the tone and style, it’s this issue that show’s off the skills of both Ken & Sam.

Ken creates a great set of characters and manages to instil the distinct feeling of a world at the mercy of otherworldly powers that are more than willing to add casualties in an ongoing battle of good vs evil.  Similarly, Sam’s work is exceptionally dark but the level of detail means he is able to flash that glimmer of hope at the reader and match the plots momentum.  If anything, the book is probably a little too good because it never feels like there’s enough pages……..you’re always looking for more but that’s why the targets on that Kickstarter have been smashed so quickly.  A great comic from a great creative team and one that will hopefully bring more issues very soon.

You still have time to jump on-board the Kickstarter for issue #1 and can keep up to date with what’s happening next in Cognition over on the Facebook& Twitter pages.