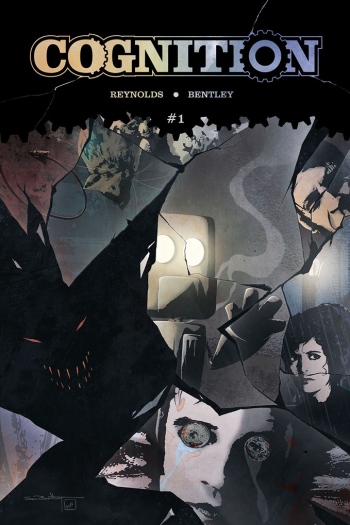 After a strong start to Cognition in #0 after a blistering Kickstarter campaign, Ken Reynolds teams up with artist Sam Bentley again to bring us the next chapter in #1.

What was the inspiration for the Cognition series?

It’s a big mixture of things, really. I love the Sherlock Holmes books, and I’m fascinated by Sir Arthur Conan Doyle. Specifically, how he wrote the most intelligent and logical detective of all time and then became obsessed with spiritualism. It’s that kind of duality that I used as a starting point.

The Victorian era is so diverse too. Such leaps in technology and understanding. It’s when the world really started opening up, becoming smaller through ‘progress’.
There are also more obvious themes of good and evil, but I try to subvert that by making it all a grey area, or at least making the distinction a choice. I’ve never liked the idea that anything is inherently good or bad by nature.

My starting point for the world was to think of the trope of a Victorian Steampunk world and wonder how it might have all started. What was the fork in the timeline to make it skew in that direction. My main character is that fork, so I like to think of it as steampunk-lite.
There’s also a bit of Pinocchio in there too.

What can we expect from this latest issue?

Issue #1 is the first full length 22 page story. Our #0 issue contained 3 shorts.
This story sees our heroes called to a grieving man hoping to get an explanation for his brothers drastic change in character before his demise. Cal & Sigma must battle with a cunning demon for an innocent soul, but they pay a price for their interference.

Issue #0 seemed to help set the tone and introduce the characters you’ve created – did the response to that change what you had planned for #1?

Oddly enough the first issue was outlined before the shorts. I’ve had the first arc (or many versions of a first arc) planned for a long time. But when it came to actually making it, I came up against that big brick wall that most indie creators bump into. Cost. My original plan was to draw it myself, but I knew I didn’t have the correct aesthetic, so once I found the artist Sam Bentley, I had to find a way to make the costs manageable.

So I wrote 3 shorts, spread the production out, and paid in small chunks instead of paying for a full issue all at once. This approach, although slow ended up having many benefits: Sam and I built a working relationship, to the point that I find myself writing to his sensibilities. Writing shorts gave me a chance to establish the characters and world without having to crowbar them into a long-form story. It proved the concept, it was clear we had something good, something with potential.

The issues seem to be self-contained but do you have more planned out?

I have a 4 issue arc planned initially. Each issue has a definite story, but they will all fit together into 1 story, that will have a conclusion. Then to book end it I have a one-shot stand alone issue 5.  Once we get to that point I’ll have lots to think about before we go beyond it. But it will be left in a place that will be easy to pick up the story again.

Sam’s artwork is suitably dark but how did you end up working with him on the title?

I do a lot of small press lettering which has been really useful in meeting and working with a diverse range of creators. Sam was suggested to me through, writer Nathan Slack who had worked with Sam on something.  It was all quite simple. Sam has become a huge part of the book. His aesthetic fits the mood perfectly. I’m always excited when I get pages in. My only problem will be keeping hold of him, as bigger books will inevitably come knocking for him soon.

What made you use Kickstarter to get Cognition out there?

Not being familiar with the Convention scene, if I’m honest.  Kickstarter is sold as a vehicle for funding, but I see it as a way to grow a readership. The community around comic books on Kickstarter is very tight and loyal. By running a campaign there I got in front of more people than I might hope to sell to at 3 or 4 conventions, all with the added bonus that they are buying into something to make it happen, not being sold something that already exists. It’s that involvement that makes Kickstarter special. Your readers make it happen, they aren’t just consumers, they are patrons.  I’m pleased to say I have plenty of backers that have returned from the #0 campaign, and I’ll be doing my best to keep them happy as well as appealing to newcomers.

The first campaign for #0 was a success but #1 seems to be have been just as successful already – how has that been?

It’s all been a bit of a surprise. I hoped that a few factors would make this second campaign a little easier, but couldn’t have predicted what’s happened. Basically, we hit the funding target in 48 hours, then the first stretch goal in 72 hours. As I write this we hit 100 backers, and that’s the number that has now become really important. The money to make it happen is there, now I would like as many people to read the book as I can possible get.
As this is the second campaign, I think there is less perceived risk. I fulfilled the first one really quickly, because I try to have everything completed and ready to go before I ask for funding. I’m only funding the printing, I self-fund the initial production.  Of course I have returning backers that have had a good experience with me in the past, so that has helped, and then there is the general buzz. When something gets going it just seems to keep rolling.  If I knew what I’d done differently this time to make it a success I’d tell you, but I think it’s just a bit of a confluence of circumstances and lots of luck.  Having said all this, I’ll be promoting and pushing all month, the work is not done! If we hit all of out stretch goals, any additional funds will go straight into making issue #2, and getting it out as quickly as we can.

What else are you working on just now??

I keep myself quite busy!  I’ve written issue #2 and I’m in the process of editing and amending it, so it’s ready to go as soon as Sam is available.  I edit an experimental comic anthology called ‘Sliced Quarterly’, We’ll be releasing our 4th issue in October to conclude our first full year, and to celebrate that I’ll be running another Kickstarter to fund a trade paperback collection. So I’m pulling all of that together. You can read & download all 3 of our issues to date from the website – There’s plenty of lettering to keep me busy of other people’s projects too. I’m also an assistant editor for David Hailwood’s sci-fi anthology 100% Biodegradable.  And when I eventually get through all of that I have a solo book that I pick at now and again. This might have to wait for Cognition to wind down a little though.

You can jump on-board the current issue #1 Kickstarter for Cognition now while you can and keep up to date with what’s happening next in Cognition over on the Facebook &Twitter pages.